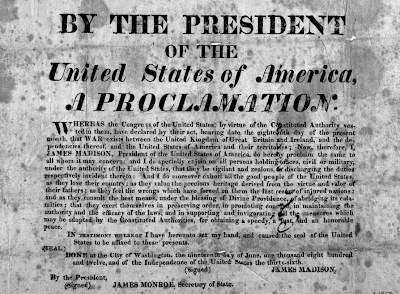 On June 19, 1812, President Madison issues a Proclamation exhorting Americans to "be vigilant and zealous in discharging" their duties in the war that has now been declared against the United Kingdom of Great Britain and Ireland and its dependencies.  He appeals to the love Americans have for their country, and "as they value the precious heritage derived from the virtue and valor of their fathers." Madison ends with the hope that the United States will obtain a "speedy, a just, and an honorable peace."


On the same day, Senator Obadiah German of New York, a strong opponent of the war,  gives a speech where he warns: "After the war is once commenced…I presume gentlemen will find something more forcible than empty war speeches will be necessary." He adds that he has acted "to check the precipitate step of plunging [the] country prematurely into a war, without any of the means of making the war terrible to the enemy; and with the certainty that it will be terrible to ourselves." Madison's Proclamation is reproduced below.

BY THE PRESIDENT OF THE UNITED STATES OF AMERICA
A PROCLAMATION

Whereas the Congress of the United States, by virtue of the constituted authority vested in them, have declared by their act bearing date the 18th day of the present month that war exists between the United Kingdom of Great Britain and Ireland and the dependencies thereof and the United States of America and their Territories:

Now, therefore, I, James Madison, President of the United States of America, do hereby proclaim the same to all whom it may concern; and I do specially enjoin on all persons holding offices, civil or military, under the authority of the United States that they be vigilant and zealous in discharging the duties respectively incident thereto; and I do moreover exhort all the good people of the United States, as they love their country, as they value the precious heritage derived from the virtue and valor of their fathers, as they feel the wrongs which have forced on them the last resort of injured nations, and as they consult the best means under the blessing of Divine Providence of abridging its calamities, that they exert themselves in preserving order, in promoting concord, in maintaining the authority and efficacy of the laws, and in supporting and invigorating all the measures which may be adopted by the constituted authorities for obtaining a speedy, a just, and an honorable peace.