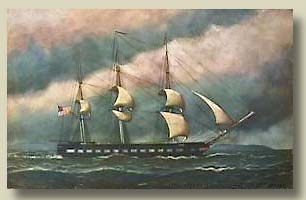 On June 9, 1912, Captain Melancthon T. Woolsey, the Commander of the United States brig of war Oneida, writes to Secretary of the Navy Hamilton to provide his account of the capture of the Lord Nelson of Upper Canada. The Lord Nelson is in Sachets Harbour in New York. It was  captured on June 5, 1812. Captain Melanchthon Woolsey's letter is reproduced below.


I have the honour to inform you that I sailed on the 3rd instant on a cruise to the Westward. On the 4th, (off Pultney Ville) discovered three sail to windward apparently standing in for Genesee River - gave chase to them, but night coming on and the weather being too hazey to run in for the mouth of the river, haul'd off shore for the night under short sail. At daylight on the 5th, discovered two schooners (supposed to be two of the three we had chased the day before (standing in for the land. At 7 p.m. we brought to one of the schooners which proved to be the Lord Nelson from Prescot (a port opposite Ogdensburgh on the St. Lawrence) said to be bound to Newark in Canada, she had no papers on board other than a loose Journal and a bill of lading of a part of her cargo, but no register, license or clearance, whether it was intended to smuggle her cargo on our shores or whether she was hovering along our shores to take on board property for the Canada market in violation of the Embargo law I was not able to determine. But appearances were such as to warrant a suspicion of her intention to smuggle both ways. I accordingly took her crew out and sent her in with my gunner on board as prize master of this port. After dispatching her, I stood off shore in chase of the other schooner which the master of the Lord Nelson informed me was the Mary Hatt (Named in honour of a daughter of Richard Hatt of Ancaster) also a British Schooner, but finding that she had crossed the line, I hove up for this port in order to lay up the prize and make my report to the Department. All the proofs which I can collect respecting her voyage, I will transmit without delay to the District Attorney

[Captain Melanchthon Woolsey operated under the authority of the Embargo Act which had been communicated to him on April 8 1812 by Secretary of the Navy Hamilton.]

Navy Department, April 8, 1812.
Sir,
You will herewith receive a copy of the "act laying an embargo, &c., passed on the 4th instant. You will use all the means in your power to enforce this law. Advise and co-operate with the Collector of Customs. The proper objects of seizure are all vessels acting or found under such circumstances as may satisfy a strong suspicion of their intention to act, in violation of this law.
In enforcing this law, we are not to violate the territorial jurisdiction of a foreign state. All vessels seized under this law are to be sent into port for adjudication; the papers found on board of them are to be placed in the hands of the District Attorney, who will thereupon proceed according to law.
PAUL HAMILTON
M.T. Woolsey, Lieut. Commanding,