The Count de Crillon, son of the celebrated Duke, who besieged Gibralter, & was famous as a great mi[li]tary character, arrived here a day or two past, & proposes to go on to Washington.1 He came from England in company with Captain Henry,2 formerly of our army; whom you probably know, is also a great military character, & in every point, truly respectable. He wishes to pay his personal respects to your Excellency, & affords me an opportunity of repeating mine in an epistolary way. Accept the unfeigned assurances of my highest estimation of your Excellency, as well as of my sincere friendship 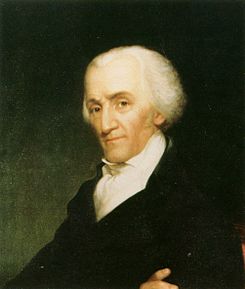 Picture of Elbridge Gerry from Wikepedia
Elbridge Gerry had a distinguished political career, serving as a delegate to the Continental Congress, signing the Declaration of Independence and the Articles of Confederation, attending as a delegate to the Constitutional Convention, but voting against the new constitution, serving in the new Congress as a strong supporter of Hamilton’s New Bank of United States, then being appointed as a member of the diplomatic delegation to France that was involved in the XYZ Affair, returning to the United in States in 1798 to become a supporter of Jefferson’s Democratic Republican party and running unsuccessfully four times for governor of Massachusetts under the party’s banner before being elected in 1810 and 1811 but losing in 1812 and ending his career as James Madison's Vice President dying in office on November 23, 1814.

He is now known for giving us the word “gerrymander.”

His support of the redistricting legislation, designed to help his party stay in power, did not help him stay in power as he was defeated as governor in 1812.

He can also be remembered as the second Vice President to die in office. The first being George Clinton, who also served under James Madison. This makes the Madison Administration the deadliest of all administrations as far as Vice Presidents are concerned.

As for Comte Crillon, more about him later.
Posted by FAASouza