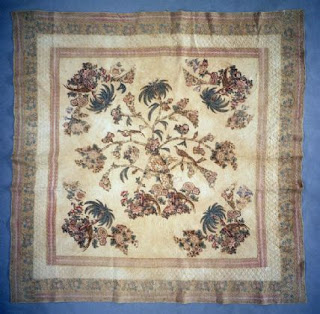 The Smithsonian describes it as "...a typical example of a medallion quilt, popular in the early nineteenth century, and often found in the American South".

The following biographical detail about Violet Alexander is also provided by the Smithsonian website::

Violet Elizabeth was the daughter of William Bain Alexander and Violet Davidson. Violet was born January 9, 1812. She was one of fourteen children (seven girls and seven boys) who grew up on a prosperous estate in Mecklenburg County, North Carolina. On December, 27, 1831 she married Dr. Isaac Wilson, who both farmed and maintained an extensive medical practice. The couple had six children, five sons and one daughter. Two sons lost their lives in the Civil War, two others farmed in the county, and another practiced medicine. Violet died at age 33 of erysipelas, a bacterial infection, during an epidemic in 1845. This quilt was made just prior to her marriage. According to information from the donor, Dr. John E. S. Davidson, the quilt may have been made by his mother, Jane Henderson (Mrs. Edward Constantine Davidson), a friend or relative of Violet.

Source: The information and image above is  taken from the Smithsonian website, National Museum of American History