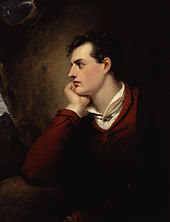 On May 1, 1812, Lord Byron writes to his lover, Lady Caroline Lamb, about the poetry of her cousin-in-law, Miss Annabella Milbanke. Byron finds merit in Annabella's poetry. In particular, he praises the lines from the poem she wrote in 1809 entitled "Lines Supposed to be Spoken at the Grave of Dermody." This poem is about the Irish poet Thomas Dermody who had published some poems before his death in 1802, at an early age, after "dissipated habits weakened his mind and body." Annabella's poem includes the following lines:

Degraded genius! o'er the untimely grave
In which the tumults of thy breast were still'd,
The rank weeds wave....

"Though I have an abhorrence of Blank Verse," Byron writes, "I Like the lines of Dermody so much that I could wish they were in rhyme."' The whole tenor of his letter shows some attraction by Byron to Annabella. One can imagine that Lady Caroline probably was not too pleased to read the letter. Byron's attraction to Annabella's charms would grow into the fall when he would propose marriage to her. For now,  Byron still has to pass through the more fiery attractions and trials of Lady Caroline Lamb. Byron's letter is reproduced below.

I have read over the few poems of Miss Milbank with attention. They display fancy, feeling, and little practice would very soon induce facility of expression.  Though I have an abhorrence of Blank Verse, I like the lines of Dermody so much that I wish they were in rhyme.  The lines in the Cave at Seaham have a turn of thought which I cannot sufficiently commend, and here I am at least candid as my own opinions differ upon such subjects.  The first stanza is very good indeed, and the others, with a few slight alterations might be rendered equally excellent.  The last are smooth and pretty.  But these are all, has she no others?  She certainly is a very extraordinary girl; who would imagine so much strength and variety of thought under that placid Countenance?  It is is not necessary for Miss M. to be an authoress, indeed I do not think publishing at all creditable either to men or women, and (though you will not believe me) very often feel ashamed of it myself; but I have no hesitation in saying that she has talents which, were it proper or requisite to indulge, would have led to distinction.

A friend of mine (fifty years old, and an author, but not Rogers) has just been here.  As there is no name to the MSS I shewed them to him, and he was much more enthusiastic in his praises than I have been.  He thinks them beautiful; I shall content myself with observing that they are better, much better, than anything of Miss M.'s protégé Blacket.  You will say as much of this to Miss M. as you think proper.  I say all this very sincerely. I have no desire to be better acquainted with Miss Milbank; she is too good for a fallen spirit to know, and I should like her more if she were less perfect.


Believe me, yours ever most truly,