On May 20, 1812, Lord Byron writes to Thomas Moore a letter with an opening sentence that joins John Bellingham, the Prime Minister's assassin, with his lover, Lady Caroline Lamb. For Byron there probably was no argument as to who was the more dangerous. "On Monday, after sitting up all night," Byron writes, "I saw Bellingham launched into eternity, and at three the same day I saw [Caroline], launched into the country." The relationship with Caroline was beginning to spiral out of control. Byron, somewhat passively, was being pulled into the Caroline maelstrom. The day before, on May 19,  he had written to Caroline in a pleading way to try to break off their affair. Byron's biographer, Benita Eisler [1], explains: 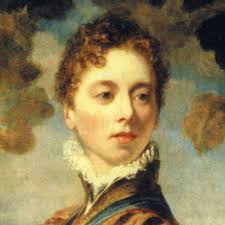 ...By the middle of May the open scandal of his affair with Caroline Lamb left all other gossip forgotten; no one could remember lovers among the “first rate” who so openly flouted all the rules governing social order. Suspecting that Byron was in retreat, Caroline now resorted to stalking him. Disguised as one of her own pages, she managed to gain entry to his rooms, where Fletcher found her rifling his master’s papers. Soon afterward she burst in on Byron when, in a predictable effort to assert his sexual independence, he was entertaining another lady.

He felt trapped in the role of pariah. Between the nightmare of notoriety and the knowledge that he was still under Caro’s spell, he was reduced to desperate pleading, writing to her on May 19: “M[oore] is in great distress about us, & indeed people talk as if there were no other pair of absurdities in London. It is hard to bear all this without cause, but worse to give cause for it.—Our folly has had the effect of a fault.—I conformed & could conform, if you would lend your aid, but I can’t bear to see you look unhappy, & am always on the watch to observe if you are trying to make me so.—We must make an effort, this dream, this delirium of two months must pass away, we in fact do not know one another, a month’s absence would make us rational, you do not think so, I know it.”

He tried to strip Caro—and himself—of the illusion cherished by lovers who also happen to be survivors of other liaisons: This affair is “different.” “We have both had 1000 previous fancies of the same kind & shall get the better of this & be as ashamed of it according to the maxim of Rochefoucault: Few are unashamed of having loved, whey they lover no longer."

May  20. 1812.
On Monday, after sitting up all night, I saw Bellingham launched into eternity , and at three the same day I saw [Lady Caroline Lamb], launched into the country.

I believe, in the beginning of June, I shall be down for a few days in Notts. If so, I shall beat you up 'en passant' with Hobhouse, who is endeavouring, like you and every body else, to keep me out of scrapes.

I meant to have written you a long letter, but I find I cannot. If any thing remarkable occurs, you will hear it from me — if good; if bad, there are plenty to tell it. In the mean time, do you be happy.
Ever yours, &c.

P.S.—My best wishes and respects to Mrs. [Moore]; — she is beautiful. I may say so even to you, for I never was more struck with a countenance."