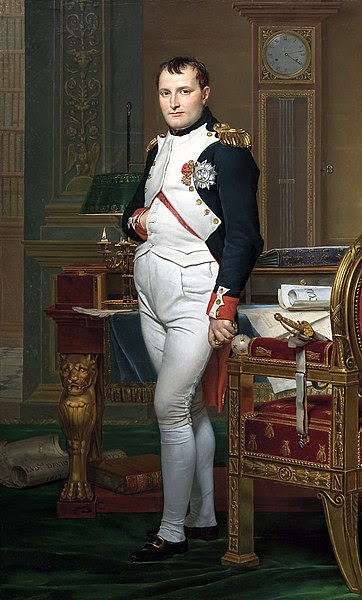 On May 23, 1812, the Emperor Napoleon gives further instructions to Général Henri Jacques Guillaume Clarke, his Minister of War, to raise more troops for the invasion of Russia. In particular, he asks him to raise troops from Naples and units stationed in Italy. He also orders Clarke to obtain at least 500 horses and 10 batteries from the Neapolitans together with additional horses and foot cannon [1].

Napoleon is in Dresden where it seems half of the ruling princes of Europe have come to pay homage to him. Napoleon is residing in the Royal Palace,  its owner Frederick Augustus, King of Saxony, having prudently decided to find other accommodation. Napoleon is playing host, among others, to Emperor Francis of Austria, King Frederick William of Prussia, Queen of Westpahalia, Grand Duke of Wurzburg, princes of Saxe-Weimar, Saxe-Coburg and Dessau. The elaborate court life instituted by Napoleon in Dresden is designed to be a visual display of his power with the princes of ancient thrones shown in their subservient roles to him. Adam Zamoyoski [2] describes a day in Dresden in this way:


At nine every morning he would hold his lever, which was the greatest display of power Europe had seen for centuries. It was attended by the Austrian Emperor and all the German kings and princes, ‘whose deference for Napoleon went far beyond anything one could imagine’, in the words of Boniface de Castellane, a twenty-four-year-old aide-de-camp. He would then lead them in to assist at the toilette of Marie-Louise. They would watch her pick her way through an astonishing assemblage of jewels and parures, trying on and discarding one after the other, and occasionally offering one to her barely older stepmother the Empress Marie Ludovica, who simmered with shame and fury. She loathed Napoleon for the upstart that he was  - and for having thrown her father off his throne of Modena many years before. Here distaste was magnified by the embarrassment and resentment she felt in the midst of this splendor, ad the poor condition of the Austria finances allowed her only a few jewels, which looked paltry next to those of Marie-Louise.

In the evening they would dined at Napoleon's table, off the silvergilt dinner service Marie-Louise had been given as a wedding present by the City of Paris, an which she had thoughtfully brought along.  The company would assemble and enter the drawing room in reverse order of seniority, each announced  by a crier, beginning with mere excellencies, going on to the various ducal and royal highnesses, and culminating with their imperial highnesses the Emperor and Empress of Austria. A while later, the doors would swing open and Napoleon would stride in, with just one word of announcement: ‘The Emperor!’ He was also the only one present who kept his hat on.