On May 2, 1812,  Samuel Taylor Coleridge writes to Charles Lamb who had been sent by William Wordsworth to try to settle the quarrel between the two poets. The quarrel had started when Wordsworth warned Basil Montagu that Coleridge was unreliable and “a rotten drunkard, rotting out his entrails by intemperance and in the habit of running into debt at little Pot-houses for Gin”  or words to that effect.  Later, Montagu had told all of this  to Coleridge and suggested that Wordsworth had "commissioned" him to do so. Coleridge was deeply offended.  Wordsworth did not immediately appreciate why Coleridge would take such offence as most of what he had said was true. Coleridge had become addicted to opium and drink and was unreliable. That made no difference to Coleridge. When he had returned earlier in the year o see his family in Keswick, Coleridge had not stopped gone to Grasmere to see Wordsworth.


On his return to London, Coleridge continued to speak badly of Wordsworth to the point that Wordsworth, always protective of his reputation, feared that the scandal would harm his ability to obtain further patronage. Wordsworth had thus decided to go to London to deal with the affair. His wife, Mary, went to Wales with their son Tom. The letters exchanged between them provide some insight into the delicate diplomacy that Wordsworth was now to pursue. The letters also show a passionate love between Wordsworth and Mary that is very moving. 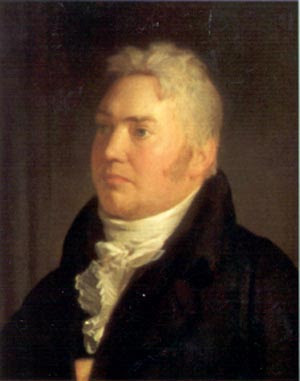 Arriving in London, Wordsworth's fears were confirmed when he spoke to the MP Richard Sharp,  who on May 1 had brought him to see debates in the House of Commons. Sharp confided to Wordsworth that Coleridge had written to him on April 24  and called Wordsworth his “bitterest Calumniator.” On May 2 Wordsworth indignantly writes to Mary:

Would you believe it. I have seen a Letter in which without naming me, though clearly meaning no other person he calls me his bitterest Calumniator, describes the agony he has suffered in consequence of the behaviour of one (meaning me the same person) who had been in his heard of hearts; and sates that his late journey to Keswick had convinced him that he had not been deluded- and accordingly being now certain of that he has recovered his tranquility, and his very appearance is improved in consequence, etc....


On April 27, Wordsworth spoke to Charles Lamb to see if he could intervene with Coleridge. Wordsworth had decided to use intermediaries to try to achieve a rapprochement with Coleridge. Some have questioned why Wordsworth would not just confront Coleridge directly. Wordsworth knew Coleridge as well as any man could so I would hesitate to question his approach. In any event, Charles Lamb was the first intermediary sent by Wordsworth in what would be a prolonged personal diplomatic enterprise carried out across the literary salons of London. Lamb conveyed to Coleridge a proposal to have Montagu and Coleridge each give his version of what had happened and then have Josiah Wedgwood decide the issue.  This appears to have been Montagu's idea. Coleridge acting sensibly, for a change, rejected the proposal.

On May 2, Coleridge writes to Charles Lamb to explain why he does not think the proposal is a good idea. The main reason is that if Montagu calls him a liar to his face then the consequence Coleridge writes"....unless I am a more abject coward than I have hitherto suspected, I need not say. Be the consequences what they may, however, I will not shrink from doing my duty." In other words, he must challenge Montagu to a duel. Coleridge's letter is reproduced below.


My dear Charles, — I should almost deserve what I have suffered, if I refused even to put my life in hazard in defence of my own honour and veracity, and in satisfaction of the honour of a friend. I say honour, in the latter instance, singly, because I never felt as a matter of serious complaint, what was stated to have been said (for this, though painfully aggravated, was yet substantially true) — but he whom it was said, and to whom, and how and when. Grievously unseasonable therefore as it is, that I should again be overtaken and hurried back by the surge, just as I had begun to feel the firm ground under  my feet — just as I had flattered myself, and given reason to my hospitable friends to flatter themselves, that I had regained tranquillity, and had become quite myself — at the time, too, when every thought should be given to my lectures, on the success or failure of my efforts in which no small part of my reputation and future prospects will depend — yet if Wordsworth, upon reflection, adheres to the plan proposed, I will not draw back. It is right, however, that I should state one or two things. First, that it has been my constant desire that evil should not propagate evil — or the unhappy accident become the means of spreading dissension. (2) That I never quarrelled with Mr. Montagu — say rather, for that is the real truth, that Mr. Montagu never was, or appeared to be, a man with whom I could, without self-contempt, allow myself to quarrel — and lastly, that in the present business there are but three possible cases — either (1) Mr. Wordsworth said what I solemnly aver that I most distinctly recollect Mr. Montagu's representing him as having said, and which / understood, not merely as great unkindness and even cruelty, but as an intentional means of putting an end to our long friendship, or to the terms at least, under which it had for so long a period subsisted — or (2), Mr. Montagu has grossly misrepresented Wordsworth, and most cruelly and wantonly injured me — or (3), I have wantonly invented and deliberately persevered in atrocious falsehoods, which place me in the same relation to Mr. Montagu as (in the second case) Mr. Montagu would stand in to me. If, therefore, Mr. Montagu declares to my face that he did not say what I solemnly aver that he did — what must be the consequence, unless I am a more abject coward than I have hitherto suspected, I need not say. Be the consequences what they may, however, I will not shrink from doing my duty; but previously to the meeting I should very much wish to transmit to Wordsworth a statement which I long ago began, with the intention of sending it to Mrs. Wordsworth's sister, — but desisted in consequence of understanding that she had already decided the matter against me. My reason for wishing this is that I think it right that Wordsworth should know, and have the means of ascertaining, some conversations which yet I could not publicly bring forward without hazarding great disquiet in a family known (though slightly) to Wordsworth — (2) Because common humanity would embarrass me in stating before a man what I and others think of his wife — and lastly, certain other points which my own delicacy and that due to Wordsworth himself and his family, preclude from being talked of. For Wordsworth ought not to forget that, whatever influence old associations may have on his mind respecting Montagu, yet that I never respected or liked him — for if I had ever in a common degree done so, I should have quarrelled with him long before we arrived in London. Yet all these facts ought to be known — because supposing Montagu to affirm what I am led to suppose he has — then nothing remains but the comparative probability of our two accounts, and for this the state of my feelings towards Wordsworth and his family, my opinion of Mr. and Mrs. Montagu, and my previous intention not to lodge with them in town, are important documents as far as they do not rely on my own present assertions. Woe is me, that a friendship of fifteen years should come to this! and such a friendship, in which I call God Almighty to be my witness, as I ever thought it no more than my duty, so did I ever feel a readiness to prefer him to myself, yea, even if life and outward reputation itself had been the pledge required. But this is now vain talking. Be it, however, remembered that I have never wandered beyond the one single complaint, that I had been cruelly and unkindly treated — that I made no charge against my friend's veracity, even in respect to his charges against me — that I have explained the circumstance to those only who had already more or less perfectly become acquainted with our difference, or were certain to hear of it from others, and that except on this one point, no word of reproach, or even of subtraction from his good name, as a good man, or from his merits as a great man, ever escaped me. May God bless you, my dear Charles.

Notes
The above post is based on information from Richard Holmes Coleridge: Darker Reflections (New York: Harper Colins, 2000). The quote from the letter of Wordsworth is form the The Love Letters of William and Mary Wordsworth, Beth Darlington, editor (Cornell University Press, 2009)
Posted by FAASouza