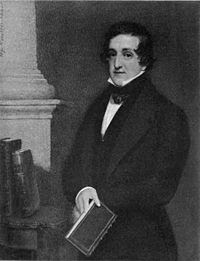 On May 3 1812, John Cam Hobhouse wrote the following entry in his diary (including a dirty joke by Lord Liverpool):


Dined at Lord Lansdowne’s. Met Sir Samuel and Lady Romilly, also Rogers and Dr Davy. Sir Samuel Romilly speaks but little. Rogers, always trying to shine, told a story of Kneller’s ear, which belongs to Jervas. Romilly mentioned of Lord Kenyon, that he was caught in the height of his grief by a friend, when he had lost his eldest son, but talking of his second, said, “There’s my next boy at my death, to be sure he will get a good thing, £60,000 at least, more than sixty, much more than sixty –” He told us that old Liverpool, talking with Calonne on finance, began thus: “Je suppose que mon vit est plus long que le votre”; to which the other replied, “La supposition est une peu forte, my lord”. The same lord would find as much humour in a finance report as others in a jest book. He was often surprised laughing heartily at tens, hundreds, thousands, tens of thousands, &c. He was once overheard soliloquising, “Yes, I am rich – very rich – much richer than the world supposes me to be”. Pleasant day on the whole. A good deal of talk about the Prince of Wales, of whom he asked to Carlton House, and of whom he did not, of whom he spoke and did not speak to, and all the world the same. Went in the evening to Lady C. Howard’s.