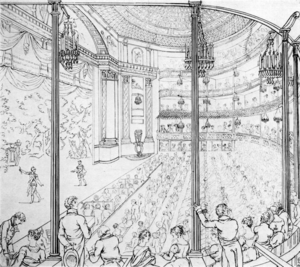 On October 10, 1812, the Theatre Royal in Drury Lane reopens with an Address written by Lord Byron and spoken by the actor Robert Elliston before he plays the title role in that night's opening production of Hamlet.

The Drury Lane Theatre was one of the two most important theatres in London. The only other "patent or monopoly theatre" was the Covent Garden Theatre. Only in these two theatres could the plays of Shakespeare be played since only these theatres were licenced for the plays of tragedy and comedy.  The two patent theatres, as Peter Cochran notes, "were in competition with at least eight other unofficial London theatres, where spoken dialogue was theoretically forbidden, and which therefore put on harlequinades, operettas, equestrian and other animal shows, pantomimes, clowns, aquatic events, and numerous other entertaining and popular hybrids."

The Drury Lane Theatre had been rebuilt after it had burned down on February 24, 1809.  Samuel Whitbread led a committee, which included Lord Holland, to oversee the rebuilding the theatre. Prominent supporters also passed the Drury Lane Theatre Bill through parliament to support the reconstruction. The new theatre was designed by Benjamin Dean Wyatt. It was operated in a new way with the theatre's manager, Samuel Arnold, reporting to a Committee of Gentlemen. This was done to try and avoid the financial mismanagement of the past.  The Committee solicited suggestions for the opening address only to find the addresses received to be inadequate. Lord Holland then turned to Byron and begged him to write something. The end result was not Byron's best work. In fact, it represented a unique collaborative effort with many redrafts and revisions as different drafts were sent to the Committee for approval. Peter Cochran describes it this way:


Never before or afterwards did Byron submit a piece to such detailed scrutiny and suggestion as he did the Address, Spoken at the Opening of Drury-lane Theatre, a robust, professional, yet utterly conventional poem, devoid of any original Byronic touches – aptly, as it’s supposed to give voice to  an entire organization. The correspondence between Holland and Byron lasts from September 10th to October 15th 1812; it takes up sixteen letters on his part, and eleven on Holland’s.He sends Holland five drafts, and Holland, or Holland’s scribe, makes four more. He offers Holland alternatives from which to choose, changes  words and lines at Holland’s suggestion (Holland at one point, carried away, submits a list of comments sixteen sides in length), and he yields, too, as the saga unfolds, to comments from Sir Samuel Whitbread, Sheridan, and Lord Lansdowne... 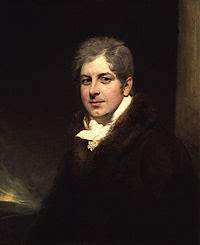 Annabella Milbanke, who was considering Byron's proposal of marriage, was in the audience on the opening night. She thought that Robert Elliston spoke the Address "vilely." [1] This was the general view. Even John Murray, Byron's publisher, agreed. He had a copy of the Address with him on the opening night. He then marked with a pencil "those parts at which the warmest approbation was loudly expressed." He later sent this marked up copy of the Address to Byron but added "there were many important variations in Mr. Elliston's delivery, which was, throughout, exceedingly bad – indeed his acting exhibits nothing but conceit."

The Address is reproduced below.

Address, Spoken At The Opening Of Drury-Lane Theatre.
Saturday, October 10, 1812

In one dread night our city saw, and sigh'd,
Bow'd to the dust, the Drama's tower of pride
In one short hour beheld the blazing fane,
Apollo sink, and Shakspeare cease to reign.

Ye who beheld, (oh! sight admired and mourn'd,
Whose radiance mock'd the ruin it adorn'd!)
Through clouds of fire the massy fragments riven,
Like Israel's pillar, chase the night from heaven;
Saw the long column of revolving flames
Shake its red shadow o'er the startled Thames,
While thousands, throng'd around the burning dome,
Shrank back appall'd, and trembled for their home,
As glared the volumed blaze, and ghastly shone
The skies, with lightnings awful as their own,
Till blackening ashes and the lonely wall
Usurp 'd the Muse's realm, and mark'd her fall;
Say - shall this new, nor less aspiring pile,
Rear'd where once rose the mightiest in our isle,
Know the same favour which the former knew,
A shrine for Shakspeare--worthy him and you?

Yes--it shall be--the magic of that name
Defies the scythe of time, the torch of flame;
On the same spot still consecrates the scene,
And bids the Drama be where she hath been:
This fabric's birth attests the potent spell--
Indulge our honest pride, and say, How well!

As soars this fare to emulate the last,
Oh! might we draw our omens from the past,
Some hour propitious to our prayers may boast
Names such as hallow still the dome we lost.
On Drury first your Siddons' thrilling art
O'erwhelm'd the gentlest, storm'd the sternest heart.
On Drury, Garrick's latest laurels grew;
Here your last tears retiring Roscius drew,
Sigh'd his last thanks, and wept his last adieu:
But still for living wit the wreaths may bloom,
That only waste their odours o'er the tomb.
Such Drury claim'd and claims--nor you refuse
One tribute to revive his slumbering muse;
With garlands deck your own Menander's head,
Nor hoard your honours idly for the dead.
Dear are the days which made our annals bright,
Ere Garrick fled, or Brinsley ceased to write.
Heirs to their labours, like all high-born heirs,
Vain of our ancestry as they of theirs;
While thus Remembrance borrows Banquo's glass
To claim the sceptred shadows as they pass,
And we the mirror hold, where imaged shine
Immortal names, emblazon'd on our line,
Pause--ere their feebler offspring you condemn,
Reflect how hard the task to rival them!

Friends of the stage! to whom both Players and Plays
Must sue alike for pardon or for praise.
Whose judging voice and eye alone direct
The boundless power to cherish or reject;
If e'er frivolity has led to fame,
And made us blush that you forbore to blame;
If e'er the sinking stage could condescend
To soothe the sickly taste it dare not mend,
All past reproach may present scenes re­fute,
And censure, wisely loud, be justly mute!
Oh! since your fiat stamps the Drama's laws,
Forbear to mock us with misplaced applause;
So pride shall doubly nerve the actor's powers,
And reason's voice be echo'd back by ours!

This greeting o'er, the ancient rule obey'd
The Drama's homage by her herald paid,
Receive our welcome too, whose every tone
Springs from our hearts, and fair would win your own.
The curtain rises--may our stage unfold
Scenes not unworthy Drury's days of old!
Britons our judges, Nature for our guide,
Still may we please--long, long may you preside.