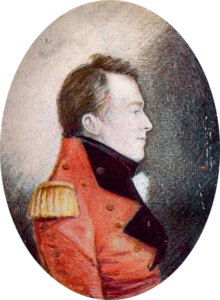 October 6, 1812, Major General Isaac Brock celebrates his 43rd birthday. Brock was born on the Island of Guernsey, which is a Channel Island, on October 6, 1769.

Brock has one week to live. Americans are working on plans to cross the Niagara and take the heights near Queenston. Brock will die on those heights on October 13, 1812.

In Britain, the Earl of Bathurst, on this day, writes to Wellington:


I send you our American news. Major-General Brock seems to be a man of energy and resource: I wish we had had him at Alicante. This news is a great relief to me. After the strong representations which I had received of the inadequacy of the force in those American settlements, I know not how I should have withstood the attack against me for having sent reinforcements to Spain instead of sending them for the defence of British possessions.

Wellington could use Brock on this day. He is engaged in the Siege of the Castle of Burgos in Spain. Things are not going well. He wants the  other forces to assist by blocking the attempts of the French to concentrate their armies. Wellington on October 6 anxiously records the movement of French forces in his own letter to the Earl of Bathurst.

The letters of the Earl of Bathurst and Wellington are reproduced below.

My DEAR Lord, - I have had the honour of receiving your letters from Villa de Toro, directing my particular attention to your Lordship's letter to Lieutenant General Maitland. I also received one from him, dated Alicante, September 19th, in which he represents himself to be incapable of any exertion, owing to illness, and expressing an earnest wish to be relieved from his command. He says that he has written to you to that effect.

I am afraid that the time will have passed by before another commanding officer can arrive capable of making this Sicilian detachment efficient.

As Sir John Murray stands high in reputation, and is represented to be very solicitous to return to Spain, it appeared at first to be so favourable an opportunity of enabling him to do so, that I had determined to concert with the Horse Guards for that purpose; for I understood you had no manner of objection to his return, if there were any division in your army to which you could have readily allotted him. It occurred to me, however, that you might possibly have despatched some General from your army, and that our two selections might have clashed. Although the referring this to you will occasion great delay, it will be better than any mistake. If you have sent another General, or intend to do so, you will have the goodness to let me know by the messenger, who will find, on his return to Corufia, a vessel to bring him back. Nothing has been done in the business.

There is no news from Sweden. The French bulletin is not, I think, decisive as to the true state of the respective armies.

I send you our American news. Major-General Brock seems to be a man of energy and resource: I wish we had had him at Alicante. This news is a great relief to me. After the strong representations which I had received of the inadequacy of the force in those American settlements, I know not how I should have withstood the attack against me for having sent reinforcements to Spain instead of sending them for the defence of British possessions.
Believe me to be, my dear Lord, ever yours sincerely,
Bathurst.

My Lord, - The enemy have made two sorties on the head of the sap, between the exterior and interior lines of the castle of Burgos, in both of which they materially injured our works, and we suffered some loss. In the last, at three in the morning of the 8th, we had the misfortune to lose the Hon. Major Cocks of the 79th, who was field officer of the trenches, and was killed in the act of rallying the troops who had been driven in. I have frequently had occasion to draw your Lordship's attention to the conduct of Major Cocks, and in one instance very recently in the attack of the horn-work of the castle of Burgos and I consider his loss as one of the greatest importance to this army and to His Majesty's service.

I am sorry to say, however, that the consumption of musket ammunition by the troops has been so large, particularly in the late sorties made by the enemy, that notwithstanding that some has been made, and that a supply of powder and musket ammunition has been received from Commodore Sir Home Popham, I cannot venture to allow of the consumption of ammunition which must take place in the storm of the enemy's works till I shall be certain of receiving a further supply.

I have ordered to Santander the transports which have musket ammunition on board at Corufia, and an officer of the Ordnance has been waiting at Santander since the beginning of the month to receive what is required.

In the mean time we are carrying on our works under ground, and I hope that I shall have another mine in readiness in a day or two, and we are endeavouring to burn the enemy's magazines by the fire of hot shot.

The enemy have not made any movement to interrupt our operations. They are still upon the Ebro, and, I understand, have received another reinforcement from France.

By the accounts which I have from Lieu tenant-General Sir Rowland Hill of the 7th instant, it appears that Marshal Soult joined the King on the frontier of Valencia and Murcia on the 29th of September. A detachment of Marshal Soult's army occupied Albacete on the 3rd instant, and a small detachment of cavalry was as far forward as Minaya on the 6th instant, but I don't consider the movement to be as yet decided.

I have not yet heard of General Ballesteros having passed the Sierra Morena, or at all of his movements since the 17th of September, when he entered Granada; nor have I heard from Major-General Cooke since he received my directions for the movement of the troops under his command.

I have reports, however, that the troops marched from Seville on the 28th of September.
I have, &c,
Wellington.