On October 19 1812, John Cam Hobhouse writes to Lord Byron after along silence between the two good friends. Hobhouse had received a brief note yesterday and today he responds. He writes of of the opening of Drury Lane and Byron`s Address. Hobhouse also mention`s France`s invasion of Russia: "Here are the French soundly beaten and taking their enemy’s capital. "

Hobhouse ends the letter by a quip about Byron`s well known abstemiousness with respect to food. "I fear you are still living without eating and drinking, and that I shall see you deserving of every one of the lean epithets bestowed by Falstaff upon Prince Henry," Hobhouse writes.  Byron was something of a vegetarian though he usually ate fish. He had been told that such a diet would help his kidney stone problems. Thomas Moore writes of a famous dinner when he first met Byron: 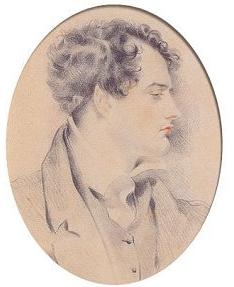 As we had none of us been apprised of his peculiarities with respect to food, the embarrassment of our host [Samuel Rogers] was not little, on discovering that there was nothing upon the table which his noble guest could eat or drink. Neither meat, fish, nor wine would Lord Byron touch; and of biscuits and soda water, which he asked for, there had been, unluckily, no provision. He professed, however, to be equally well pleased with potatoes and vinegar; and of these meagre materials contrived to make rather a hearty meal...

We frequently, during the first months of our acquaintance dined together alone. . . . Though at times he would drink freely enough of claret, he still adhered to his system of abstinence in food. He appeared, indeed, to have conceived a notion that animal food has some peculiar influence on the character; and I remember one day, as I sat opposite to him, employed, I suppose, rather earnestly over a 'beef-steak,' after watching me for a few seconds, he said in a grave tone of inquiry, - 'Moore, don't you find eating beef-steak makes you ferocious?' "

Hobhouse`s letter to Byron is reproduced below.
Hobhouse to Byron, from Whitton, October 19th 1812:


Whitton Park, Octob. 19,
My dear Byron,  It is completely out of my power to go down to Eywood, and, thanking Lady Oxford for her invitation, which is indeed very kind and pressing, I have been obliged to tell her Ladyship that I can not leave London. I have directed to Herefordshire but in case the letter should miscarry and you should go to Eywood pray have the kindness to say every thing proper for me on the occasion – I suppose you, by this time, know the Drury Lane adventure chapter and verse. The world is certainly bewitched.

Here are the French soundly beaten and taking their enemy’s capital and here is D Busby soundly beaten also and yet gaining possession, after a hard struggle, of the stage – The transaction as it was told in the papers, especially the Times, very nearly suffocated Baillie and myself with laughter when we read it at Beaconsfield, and we began to entertain doubts of its authenticity until we arrived in London and heard the thing in all its detail – The joke at present is against the Doctor, but it will next be against those who have subscribed for his Lucretius, and committed their names in support of the most complete scaramouch of Literature that ever put on the Harlequin coat of black & white – I intend to go to the Theater in hopes of a second scene from the said Busby, or an equally ludicrous effort from some other disappointed prologizer – They say Elliston speaks your lines badly – I presume you intend to come up and hear one recital at least  – Have you received a letter from Mr  Rob. Walpole forwarded through Mr Murray’s hands, relative to a compilation to which Lord Aberdeen and Dr Clarke & Mr Morritt et ceteri; are to be contributors? If you have not I will, according to desire from the said learned clergyman, inform you of something which, as the advertisements say, may be to your advantage –

Conceiving you to be an incorrigible author I should not wonder if you gave all answer in the affirmative for that to which I replied in the negative – Not a line have I had from you for many many weeks until the receipt of your scrap yesterday.

Now what does all this mean? I did certainly expect to find one letter on my table when I returned from Wales, and seeing your frank presumed that you had broken your silence – If you can spare five minutes pray let me have some intimation of your intended proceedings and let me know when I shall have the pleasure of shaking you by the hand in London. I suppose you will now do as Dr Johnson said he would do if he were Garrick, and have already prepared your Beadle’s staves. Davies wrote that you had plan’d a debauch at Kings College & he has been kind enough to invite me for a day which is now past – The word debauch is mine, not his. I fear you are still living without eating and drinking, and that I shall see you deserving of every one of the lean epithets bestowed by Falstaff upon Prince Henry – believe me ever most sincerely John C. Hobhouse