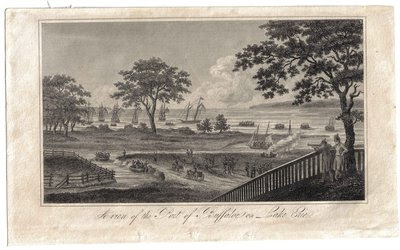 On October 21 1812,  Major Lovett, writes to Honourable Abraham Van Vechten about the Battle of Queenston Heights. Lovett tries to explain that General Van Rensselaer was forced into a battle that he did not want:"The Battle was by no means a matter of choice, but absolute necessity with Genl. Van Rensselaer." The full letter is reproduced below.

Dear Sir - I know that you are anxious to hear from us, and I should have written you several days ago; but really I could not command a single moment of time to do it: and besides the privations to which our late situation subjected us has worn me down a good deal. The preparations for the battle were extensive — the various emergencies of the day called for great effort; the scenes of the night were trying, and the duties of the following day arduous. It is over; and as I have but little time now, I shall write but a word. The Battle was by no means a matter of choice, but absolute necessity with Genl. Van Rensselaer — A flood of circumstances had convinced the Genl. as early as the beginning of this month that a blow must be struck. He was therefore maturing a plan to close the campaign in the most honorable way he could. But the impetuosity of not only men, but his first officers became such that he was absolutely compelled to go to battle, or risk such consequences as no man could endure. * * * The Army are immensely attached to Genl. Van Rensselaer and Solomon : and they are almost frantic at their departure. The General feels all the solicitude that a Patriot jealous of his honor can experience; but he is  cheerful, and reposes himself on solid consciousness of having done all that man could do in his situation. * * * On the morning of the 18th, I mounted Colonel Van Rensselaer on a cot, rigged with cross-bars and side poles and a Detachment of Major Mosely's Riflemen brought him by hand to Schlosser, where we tarried that night. As we passed the main Battery at Lewiston, they fired a salute of six guns and cheered the Hero heartily. On the 19th I embarked him on board a Boat, and arrived here at 8 o'clock in the evening.

The Genl. is here in perfect health, and will continue here till he can hear from Genl. Dearborn, and then I expect, he will return home. I shall not leave Solomon. He is badly shot to pieces: has one more ball in the thigh than what is stated in the official paper; but he is in quiet quarters where he has every attention. His wounds work well, he will recover and be a well man: but I fear he will never leave off fighting. Indulge no solicitude as to his recovery * * * Let Solomon's wife know all about him, assure her 1 shall not leave him, but will return him safe to her. * * * I am Yours very truly,
John Lovett.
Posted by FAASouza