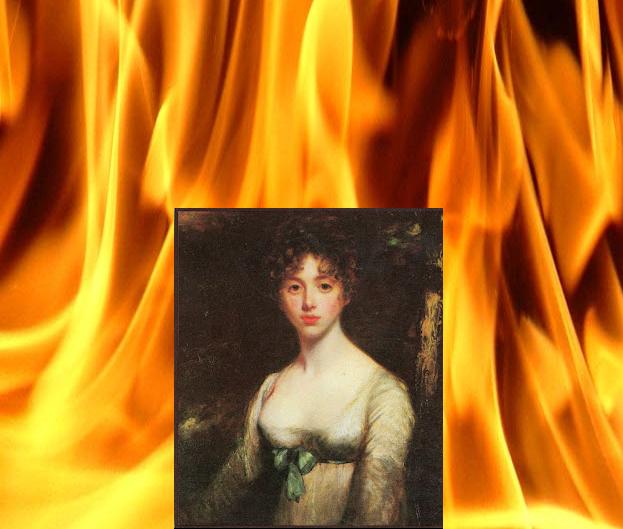 On December 23 1812, Lord Byron answers a letter from Lady Melbourne who has told him about the bonfire that Lady Caroline Lamb held at Brocket Hall in which copies of Byron’s letters were burned. Fiona MacCarthy, in her biography of Byron, describes the bonfire:


In December Lady Caroline staged a terrible and imaginative revenge, ordering a bonfire to be lit in the grounds of Brocket Hall, the Melbourne house in Hertfordshire. She instructed a group of village girls from Welwyn, dressed in white, to dance around the bonfire. One of her pages recited the lines she had composed, celebrating the burning in effigy of Byron, an Englishman as traitorous as Guy Fawkes himself. Into the flames she cast a replica of  his miniature, copies of his letters chains and rings, flowers and feathers, tawdry ornaments of love:

And gold and trinkets glitter in the flame."

There were probably flames in Caroline's eyes as she gazed on her intricately choreographed masterpiece of poetry and dance, fire and malice.

Decr. 23d. 1812
My dear Lady M. – Your last anecdote seems to shew that our friend is actually possessed by “the foul fiend Hibertigibbet who presides over mopping & mowing”  & if the provincial literati dont insert it in the St. Alban’s Mercury, the collectors of extraordinaries ought to be dismissed for malversation & omission. – Seriously though all this forms my best justification – I very much fear it will not forward your interests at the next election except amongst ye. ballad-makers. – What will the Lady B.- say? I fear it will go nigh to the recall of Sir W. Farquhar & the ancient disorder. –
Was the “odious book” (which has just attained the summit of fame by giving a name to a {very slow} race horse!) added to the conflagration? & what might be the pretty piece of eloquence delivered by her right trusty Henchman? My letters would have added very appropriately to ye. combustibles & I regret ye. omission of such exquisite ingredients. – – –
I wrote to you yesterday (franked & directed to B. H. not having then received ye. mandate to ye. contrary) & do not know that I can add anything to my details in that sheet – we are completely out of the world in this place, & have not even a difference to diversify the scene or amuse our correspondents, & you know perhaps that the recapitulation or display of all good things is very insipid to auditors or beholders. – I wait the news of the reception of that same ineffable letter now in your hands, though (as I tell her) I have no great hopes of its’ doing the least good. – It is written a little gravely but very much nevertheless in the usual tone which Ly. B is pleased to say is not “soothing.” – – I am really become very indifferent as to her next proceedings, for what can she do worse than she has already done? – I am much amused with ye. tale of Ly. Cowper’s little girl – her Mamma has always had a great share of my most respectful admiration, but I dont desire to be remembered to any of you as I suppose the best wish you have is to forget me as soon as possible; besides which under ye
. impression of C’s correspondence Ly . C must conceive me to be a sucking Catiline only less respectable. – Bankes is going abroad, & as I said in my last it is not very unlikely that I may recommence voyaging amongst the Mussulmen. – If so I claim you as a correspondent; since you wont give me up to the reasonable request of the moderate C. & in truth I don’t wish you should. – You know I have obeyed you in everything, from in my suit to ye. Princess of Parallelograms, my breach with little Mania,  & my subsequent acknowledgement of the sovereignty of Armida  – you have been my director & are still for I do not know anything you could not make me do or undo – & my m’amie (but this you wont believe) has not yet learned the art of managing me, nor superseded your authority. – You would have laughed a little time ago, when I inadvertantly said talking of you that there was nothing you could not make me do or give up (if you thought it worth while) a sentiment which did not meet with the entire approbation of my audience but which I maintained like a Muscovite enamoured of Despotism. – I hear little from London but the lies of the Gazette & will back Buonaparte against the field still.–Pray write– & tell me how your taming goes on – I am all acquiescence to you & as much yours as ever dr. Ly. M