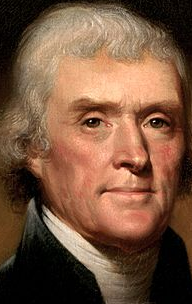 On December 28 1812, Thomas Jefferson from Monticello, writes to John Adams.

Dear Sir,—An absence of five or six weeks, on a journey I take three or four times a year, must apologize for my late acknowledgment of your favor of October 12th. After getting through the mass of business which generally accumulates during my absence, my first attention has been bestowed on the subject of your letter. I turned to the passages you refer to in Hutchinson and Winthrop, and with the aid of their dates, I examined our historians to see if Wollaston’s migration to this State was noticed by them. It happens, unluckily, that Smith and Stith, who alone of them go into minute facts, bring their histories, the former only to 1623, and the latter to 1624. Wollaston’s arrival in Massachusetts was in 1625, and his removal to this State was "sometime" after. Beverly & Keith,who came lower down, are nearly superficial, giving nothing but those general facts which every one knew as well as themselves. If our public records of that date were not among those destroyed by the British on their invasion of this State, they may possibly have noticed Wollaston. What I possessed in this way have been given out to two gentlemen, the one engaged in writing our history, the other in collecting our ancient laws; so that none of these resources are at present accessible to me. Recollecting that Nathaniel Morton, in his New England memorial, gives with minuteness the early annals of the colony of New Plymouth, and occasionally interweaves the occurrences of that on Massachusetts Bay, I recurred to him, and under the year 1628, I find he notices both Wollaston and Thomas Morton, and gives with respect to both, some details which are not in Hutchinson or Winthrop. As you do not refer to him, and so possibly may not have his book, I will transcribe from it the entire passage, which will prove at least my desire to gratify your curiosity as far as the materials within my power will enable me.

"Whereas about three years before this time, there came over one Captain Wollaston, a man of considerable parts, and with him three or four more of some eminency who brought with them a great many servants, with provisions and other requisites for to begin a plantation, and pitched themselves in a place within the Massachusetts Bay, which they called afterwards by their captain’s name, Mount Wollaston; which place is since called by the name of Braintry. And amongst others that came with him, there was one Mr. Thomas Morton, who, it should seem, had some small adventure of his own or other men’s amongst them, but had little respect, and was slighted by the meanest servants they kept. They having continued some time in New England, and not finding things to answer their expectation, nor profit to arise as they looked for, the said Captain Wollaston takes a great part of the servants and transports them to Virginia  and disposed of them there, and writes back to one Mr. Rasdale, one of his chief partners, (and accounted then merchant,) to bring another part of them to Virginia, likewise intending to put them off there as he had done the rest; and he, with the consent of the said Rasdale, appointed one whose name was Filcher, to be his Lieutenant, and  govern the remainder of the plantation until he or Rasdale should take further order thereabout. But the aforesaid Morton, (having more craft than honesty,) having been a petty-foggerat Furnival’s-inn, he, in the other’s absence, watches an opportunity, (commons being put hard among them,) and got some strong drink and other junkets, and made them a feast, and after they were merry, he began to tell them he would give them good counsel. You see, (saith he,) that many of your fellows are carried to Virginia, and if you stay still until Rasdale’s return, you will also be carried away and sold for slaves with the rest; therefore I would advise you to thrust out Lieutenant Filcher, and I having a part in the plantation, will receive you as my partners, and consociates, so you may be free from service,and we will converse, plant, trade and live together as equals (or to the like effect). This counsel was easily followed; so they took opportunity, and thrust Lieutenant Filcher out of doors, and would not suffer him to come anymore amongst them, but forced him to seek bread to eat and other necessaries amongst his neighbors, till he would get passage for England, (See the sad effect of want of good government.)

"After this they fell to great licentiousness of life, in all prophaneness, and the said Morton became lord of misrule, and maintained (as it were) a school of Atheism,and after they had got some goods into their hands, and got much by trading with the Indians, they spent it as vainly, in quaffing and drinking both wine and strong liquors in great excess, (as some have reported,) ten pounds worth in a morning, setting up a May pole, drinking and dancing about like so many fairies, or furies rather, yea and worse practices, as if they had anew revived and celebrated the feast of the Roman goddess Flora, or the beastly practices of the mad Bacchanalians. The said Morton likewise to show his poetry, composed sundry rythmes and verses, some tending to licentiousness, and others to the detraction and scandal of some persons’ names, which he affixed to his idle or idol May-pole ; they changed also the name of their place, and instead of calling it Mount Wollaston, they called it the Merry Mount, as if this jollity would have lasted always. But this continued not long, for shortly after that worthy gentleman Mr.John Antacid, who brought over a patent under the broad seal of England for the government of the Massachusetts, visiting those parts, caused that Maypole to be cut down, and rebuked them for their prophaneness, and admonished them tolook to it that they walked better ; so the name was again changed and called Mount Dagon."


So far Nathaniel Morton. The copy you have of Thomas Morton’s New English Canaan, printed in 1637 by Stam of Amsterdam, was a second edition of that "infamous and scurrilous book against the godly." The first had been printed in 1632, by Charles Green, in a quarto of 188 pages, and is the one alluded to by N.Morton. Both of them made a part of the American library given by White Kennett in 1713 to the Society for the propagation of the Gospel in foreign parts. This society being a chartered one, still, as I believe, existing, and probably their library also, I suppose that these and the other books of that immense collection, the catalogue of which occupies 275 pages quarto, are still to be found with them. If any research I can hereafter make should ever bring to my knowledge anything more of Wollaston, I shall not fail to communicate it to you. Ever and affectionately yours.