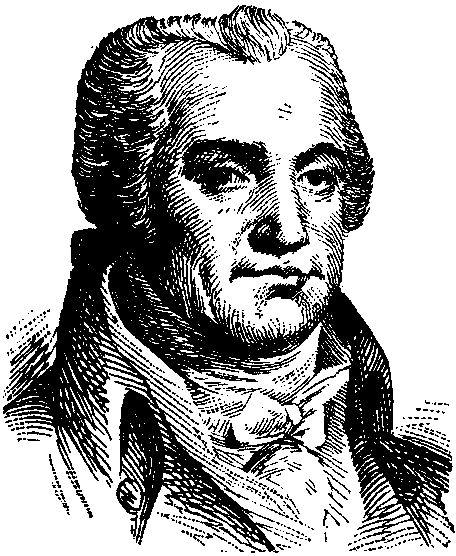 On December 26, 1812, or earlier on December 24 - the date is not certain [1] - the American diplomat to France, and poet Joel Barlow died of pneumonia in Zarnowiec, between Warsaw and Krakow. Barlow had pursued Napoleon to Vilna that year to try and negotiate a treaty between the United States and France. Napoleon was otherwise occupied at the time. Henry Adams will write of Barlow, perhaps a little unfairly, and the American relationship with France in 1812 as follows:

While Napoleon remained at Moscow, unable to advance and unwilling to retreat, Bassano wrote, October 11, from Wilna a letter to Barlow saying that the Emperor, regretting the delay which attended negotiation conducted at so great a distance, had put an end to the Due Dalberg's authority and requested Barlow to come in person to Wilna. The request itself was an outrage, for its motive could not be mistaken. For an entire year Barlow had seen the French government elude every demand he made, and he could not fail to understand that the journey to Wilna caused indefinite further delay, when a letter of ten lines to Dalberg might remove every obstacle; but however futile the invitation might be, refusal would have excused the French government's inaction. Throughout life Barlow exulted in activity; a famous traveller, no fatigue or exposure checked his restlessness, and although approaching his sixtieth year he feared no journey. He accepted Bassano's invitation, and October 25 wrote that he should set out the following day for Wilna. A week earlier, Napoleon quitted Moscow, and began his retreat to Poland.

Ten days brought Barlow to Berlin, and already Napoleon's army was in full flight and in danger of destruction, although the winter had hardly begun. November 11 Barlow reached Kbnigsberg and plunged into the wastes of Poland. Everywhere on the road he saw the devastation of war, and when he reached Wilna, November 18, he found only confusion. Every one knew that Napoleon was defeated, but no one yet knew the tragedy that had reduced his army of half a million men to a desperate remnant numbering some fifty thousand. While Barlow waited for Napoleon's arrival, Napoleon struggled through one obstacle after another until the fatal passage of the Beresina, November 27, which dissolved his army and caused him to abandon it. December 5, at midnight, he started for Paris, having sent a courier -in advance to warn the Due de Bassano, who lost no time in dismissing his guests from Wilna, where they were no longer safe. Barlow quitted Wilna for Paris the day before Napoleon left his army; but Napoleon soon passed him on the road. The weather was very cold, the thermometer thirteen degrees below zero of Fahrenheit; but Barlow travelled night and day, and after passing through Warsaw, reached a small village called Zarnovitch near Cracow. There he was obliged to stop. Fatigue and exposure caused an acute inflammation of the lungs, which ended his life Dec. 24, 1812. A week earlier Napoleon had reached Paris.

Barlow's death passed almost unnoticed, in the general catastrophe of which it was so small a part. Not until March, 1813, was it known in America; and the news had the less effect because circumstances were greatly changed. Madison's earnestness in demanding satisfaction from France expressed not so much his own feelings as fear of his domestic opponents. The triumph of Russia and England strengthened the domestic opposition beyond hope of harmony, and left the President in a desperate strait. No treaty, either with or without indemnities, could longer benefit greatly the Administration, while Napoleon's overthrow threatened to carry down Madison himself in the general ruin. In his own words,

"Had the French emperor not been broken down, as he was to a degree at variance with all probability and which no human sagacity could anticipate, can it be doubted that Great Britain would have been constrained by her own situation and the demands of her allies to listen to our reasonable terms of reconciliation? The moment chosen for war would therefore have been well chosen, if chosen with a reference to the French expedition against Russia; and although not so chosen, the coincidence between the war and the expedition promised at the time to be as favorable as it was fortuitous."

Thus the year 1812 closed American relations with France in disappointment and mortification. Whatever hopes Madison might still cherish, he could not repeat the happy diplomacy of 1778 or of 1803. From France he could gain nothing. He had challenged a danger more serious than he ever imagined; for he stood alone in the world in the face of victorious England.

Notes
1. The existing church tablet in Poland gives it as December 26.
Posted by FAASouza