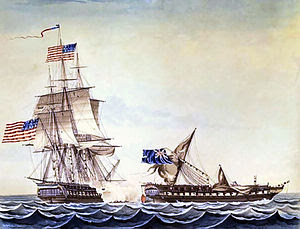 At 10 the Java made the private signals, English, Spanish, and Portuguese in succession, none being answered; meanwhile the Constitution was standing up toward the Java on the starboard tack; a little after 11 she hoisted her private signal, and then, being satisfied that the strange sail was an enemy, she wore and stood off toward the S.E., to draw her antagonist away from the land,1 which was plainly visible. The Java hauled up, and made sail in a parallel course, the Constitution bearing about three points on her lee bow. The Java gained rapidly, being much the swifter.

At 1.30 the Constitution luffed up, shortened her canvas to top-sails, top-gallant sails, jib, and spanker, and ran easily off on the port tack, heading toward the southeast; she carried her commodore's pendant at the main, national ensigns at the mizzen-peak and main top-gallant mast-head, and a Jack at the fore. The Java also had taken in the main-sail and royals, and came down in a lasking course on her adversary's weather-quarter,2 hoisting her ensign at the mizzen-peak, a union Jack at the mizzen top-gallant mast-head, and another lashed to the main-rigging. At 2 P.M., the Constitution fired a shot ahead of her, following it quickly by a broadside,3 and the two ships began at long bowls, the English firing the lee or starboard battery while the Americans replied with their port guns. The cannonade was very spirited on both sides, the ships suffering about equally. The first broadside of the Java was very destructive, killing and wounding several of the Constitution's crew. The Java kept edging down, and the action continued, with grape and musketry in addition; the swifter British ship soon forereached and kept away, intending to wear across her slower antagonist's bow and rake her; but the latter wore in the smoke, and the two combatants ran off to the westward, the Englishman still a-weather and steering freer than the Constitution, which had luffed to close.4 The action went on at pistol-shot distance. In a few minutes, however, the Java again forged ahead, out of the weight of her adversary's fire, and then kept off, as before, to cross her bows; and, as before, the Constitution avoided this by wearing, both ships again coming round with their heads to the east, the American still to leeward.
The Java kept the weather-gage tenaciously, forereaching a little, and whenever the Constitution got up to close,1 the former tried to rake her. But her gunnery was now poor, little damage being done by it; most of the loss the Americans suffered was early in the action. By setting her foresail and main-sail the Constitution got up close on the enemy's lee beam, her fire being very heavy and carrying away the end of the Java's bowsprit and her jib-boom.2 The Constitution forged ahead and repeated her former manoeuvre, wearing in the smoke. The Java at once hove in stays, but owing to the loss of head-sail fell off very slowly, and the American frigate poured a heavy raking broadside into her stern, at about two cables' length distance. The Java replied with her port guns as she fell off.3 Both vessels then bore up and ran off free, with the wind on the port quarter; the Java being abreast and to windward of her antagonist, both with their heads a little east of south. The ships were less than a cable's length apart, and the Constitution inflicted great damage while suffering very little herself. The British lost many men by the musketry of the American topmen, and suffered still more from the round and grape, especially on the forecastle,4 many marked instances of valor being shown on both sides. The Java's masts were wounded and her rigging cut to pieces, and Captain Lambert then ordered her to be laid aboard the enemy, who was on her lee beam. The helm was put a-weather, and the Java came down for the Constitution's mainchains. The boarders and marines gathered in the gangways and on the forecastle, the boatswain having been ordered to cheer them up with his pipe that they might make a clean spring. The Americans, however, raked the British with terrible effect, cutting off their main top-mast above the cap, and their foremast near the cat harpings.

The stump of the Java's bowsprit got caught in the Constitution's mizzen-rigging, and before it got clear the British suffered still more.

Finally the ships separated, the Java's bowsprit passing over the taffrail of the Constitution; the latter at once kept away to avoid being raked. The ships again got nearly abreast, but the Constitution, in her turn, forereached; whereupon Commodore Bainbridge wore, passed his antagonist, luffed up under his quarter, raked him with the starboard guns, then wore, and recommenced the action with his port broadside at about 3.10. Again the vessels were abreast, and the action went on as furiously as ever. The wreck of the top hamper on the Java lay over her starboard side, so that every discharge of her guns set her on fire,1 and in a few minutes her able and gallant commander was mortally wounded by a ball fired by one of the American main-top-men. The command then devolved on the first lieutenant, Chads, himself painfully wounded. The slaughter had been terrible, yet the British fought on with stubborn resolution, cheering lustily. But success was now hopeless, for nothing could stand against the cool precision of the Yankee fire. The stump of the Java's foremast was carried away by a double-headed shot, the mizzen-mast fell, the gaff and spanker boom were shot away, also the main-yard, and finally the ensign was cut down by a shot, and all her guns absolutely silenced; when at 4.05 the Constitution, thinking her adversary had struck,3 ceased firing, hauled aboard her tacks, and passed across her adversary's bows to windward, with her top-sails, jib, and spanker set. A few minutes afterward the Java's main-mast fell, leaving her a sheer hulk. The Constitution assumed a weatherly position, and spent an hour in repairing damages and securing her masts; then she wore and stood toward her enemy, whose flag was again flying, but only for bravado, for as soon as the Constitution stood across her forefoot she struck.

At 5.25 she was taken possession of by Lieutenant Parker, 1st of the Constitution, in one of the latter's only two remaining boats.

The American ship had suffered comparatively little. But a round shot had struck her hull, one of which carried away the wheel; one 18-pounder went through the mizzen-mast; the fire-mast, main-top-mast, and a few other spars were slightly wounded, and the running rigging and shrouds were a good deal cut; but in an hour she was again in good fighting trim. Her loss amounted to 8 seamen and 1 marine killed; the 5th lieutenant, John C. Alwyn, and 2 seamen, mortally, Commodore Bainbridge and 12 seamen, severely, and 7 seamen and 2 marines, slightly wounded; in all 12 killed and mortally wounded, and 22 wounded severely and slightly.1

"The Java sustained unequalled injuries beyond the Constitution," says the British account. These have already been given in detail; she was a riddled and entirely dismasted hulk. Her loss (for discussion of which see farther on) was 48 killed (including Captain Henry Lambert, who died soon after the close of the action, and five midshipmen), and 102 wounded, among them Lieutenant Henry Ducie Chads, Lieutenant of Marines David Davies, Commander John Marshall, Lieut. James Saunders, the boatswain, James Humble, master, Batty Robinson, and four midshipmen.

In this action both ships displayed equal gallantry and seamanship. "The Java," says Commodore Bainbridge, "was exceedingly well handled and bravely fought. Poor Captain Lambert was a distinguished and gallant officer, and a most worthy man, whose death I sincerely regret." The manoeuvring on both sides was excellent; Captain Lambert used the advantage which his ship possessed in her superior speed most skillfully, always endeavoring to run across his adversary's bows and rake him when he had forereached, and it was only owing to the equal skill which his antagonist displayed that he was foiled, the length of the combat being due to the number of evolutions.

The great superiority of the Americans was in their gunnery. The fire of the Java was both less rapid and less well directed than that of her antagonist; the difference of force against her was not heavy, being about as ten is to nine, and was by no means enough to account for the almost fivefold greater loss she suffered.