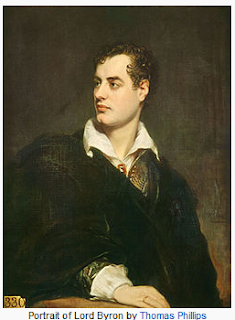 On September 18, 1812, Lord Byron is again writing to Lady Melbourne about marriage and her niece, Lady Milbanke. Lady Melbourne has asked if he is sure. Byron responds:

You ask “am I sure of myself?” I answer – no – but you are, which I take to be a much better thing. –  Miss M. I admire because she is a clever woman, an amiable woman & of high blood, for I have still a few Norman & Scotch inherited prejudices on the last score, were I to marry. – As to Love, that is done in a week, (provided the Lady has a reasonable share) besides marriage goes on better with esteem & confidence than romance, & she is quite pretty enough to be loved by her husband, without being so glaringly beautiful as to attract too many rivals.

My dear Ly. Melbourne I only wish you thought your influence worth a “boast” I should look upon it as the highest compliment paid to myself. – To you it would be none, for (besides the little value of the thing) you have seen enough to convince you how easily I am governed by anyone’s presence, but you would be obeyed even in absence. – All persons in this situation are so from having too much heart or too little head, one or both, set mine down according to your own calculations. You & yours seem to me much the same as the Ottoman family to the faithful, they frequently change their rulers, but never the reigning race; I am perfectly convinced that if I fell in love with a woman of Thibet she would turn out an emigré cousin of some of you. –


You ask “am I sure of myself?” I answer – no – but you are, which I take to be a much better thing. –  Miss M. I admire because she is a clever woman, an amiable woman & of high blood, for I have still a few Norman & Scotch inherited prejudices on the last score, were I to marry. – As to Love, that is done in a week, (provided the Lady has a reasonable share) besides marriage goes on better with esteem & confidence than romance, & she is quite pretty enough to be loved by her husband, without being so glaringly beautiful as to attract too many rivals. – She always reminds me of “Emma” in the modern Griselda, & whomever I may marry, that is the woman I would wish to have married. – It is odd enough that my acquaintance with C[aroline] commenced with a confidence on my part about your Niece, C[aroline] herself (as I have often told her) was then not at all to my taste, nor I, (& I may believe her) to hers, & we shall end probably as we begun. – However, if after all “it is decreed on high” that, like James the Fatalist,  I must be hers, she shall be mine as long as it pleases her, & the circumstances under which she becomes so, will at least make me devote my life to the vain attempt of reconciling her to herself, wretched as it would render me, she should never know it; the sentence once past, I could never restore that which she had lost, but all the reparation I could make should be made, & the cup drained to the very dregs by myself so that it’s bitterness passed from her. –


In the mean time, till it is irrevocable, I must & may fairly endeavour to extricate both from a situation, which from our total want of all but selfish considerations has brought us to the brink of the gulph, before I sink I will at least have a swim for it, though I wish with all my heart it was the Hellespont instead, or that I could cross this as easily as I did ye. other. – One reproach I cannot escape, whatever happens hereafter she will charge it on me & so shall I, & I fear that

“The first step of error none e’er could recall
And the woman once fallen forever must fall,
Pursue to the last the career she begun,
And be false unto many, as faithless to one.”

Forgive one stanza of my own sad rhymes, you know I never did inflict any upon you before, nor will again. – What think you of Ly. B’s last? she is losing those brilliant hopes expressed in the former epistle. – I have written 3 letters to Ireland, & cannot compass more, the last to Ly. B. herself in which I never mentioned Ly. C’s name nor yours (if I recollect aright) nor alluded to either. – – It is an odd thing to say, but I am sure Ly. B. will be a little provoked, if I am the first to change, for like the Governor of Tilbury fort, although “the Countess is resolved” the mother intenerisce un poco,  & doubtless will expect her daughter to be adored (like an Irish Lease) for a term of 99 years. – I say it again, that happy as she must & will be to have it broken off anyhow, she will hate me if I don’t break my heart; now is it not so? – laugh – but answer me truly? – – I am not sorry that C— sends you extracts from my epistles, I deserve it for the passage I shewed once to you, but remember that was in the outset & when every thing said or sung was exculpatory, & innocent & what not – Moreover recollect what absurdities a man must write to his Idol, & that “garbled extracts” prove nothing without the context; for my own part I declare that I recollect no such proposal of an epistolary truce, & the Gambols at divers houses of entertainment with ye. express & c. tend ye. rather to confirm my statement. But I cannot be sure, or answerable for all I have said or unsaid since “Jove himself (some with Mrs. Malaprop would read Job) has forgotten to “laugh at our perjuries”

I am certain that I tremble for the trunkfuls of my contradictions, since like a Minister or a woman she may one day exhibit them in some magazine or some quartos of villainous memoirs written in her 7000th. love fit. –

Now dear Ly. M. my paper spares you – Believe me with great regard yrs ever, BN

[on inside of envelope:]

P.S.
In your last you say you are “surrounded by fools” – why then “Motley’s the only wear”

well will you answer “thou shalt have one”
Chi va piano va sano
e chi va sano va lontano
[“He who goes quietly goes safely, and he who goes safely goes a long way”]

My progress has been “lontano” but alas ye “sano” & “piano” are past praying for. –