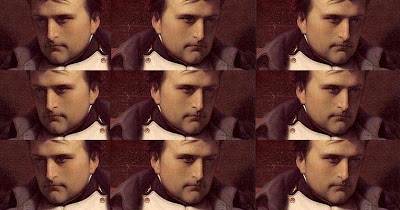 On September 2 1812, Napoleon is at Gzhatsk, a town about 95 miles from Moscow and about 30 miles from Borodino, when he receives the letter from the Duke of Ragusa (Marmont) dated  July 25, 1812 with news of the loss at Salamanca, Spain. Napoleon is furious. He writes immediately to Général Henri Jacques Guillaume Clarke, his Minister of War, to demand an explanation. Napoleon's letters are reproduced below.

Monsieur le Due de Feltre,—I have received the Duke of Ragusa's report on the battle of the 22nd. It is impossible to read anything with less meaning; it is fuller of intricacies and wheelworks than a clock, and it contains not one word of information as to the real state of things.

Here is the view which I take of the affair and of the conduct to be held by you :—
You will wait till the Duke of Ragusa has arrived, till his wounds are cured and his recovery is nearly complete. You will then ask him for a categorical answer to the following questions:—

Why did he offer battle without the orders of his commanderin-chief?

Placed, as he was, by the general dispositions of the army, at Salamanca, it was natural that he should defend himself if attacked; but since he had evacuated Salamanca, and left it several marches behind him, why did he not inform his commander-inchief? Why did he not ask for orders as to his conduct, dependent as that ought to have been on the general system of my armies of Spain?

His insubordination has caused all these disasters. And even supposing that he was not obliged to put himself into communication with his commander-in-chief and to obey his orders, what could have induced him to abandon his defensive position on the Douro, when, without overstraining his imagination, he might have supposed it possible that he might be reinforced by the arrival of the division of dragoons, of 30 pieces of cannon, and by more than 15,000 French troops whom the King had in hand?How could he exchange his defensive for an offensive position, without waiting for the junction and assistance of a corps consisting of from 15,000 to 17,000 men?

The King had ordered the army of the North to despatch its cavalry to his assistance; they were on their way; the Duke of Ragusa must have been aware of it, as the cavalry arrived on the evening after the battle.

There are several marches between Salamanca and Burgos; why did he not make a delay of two days in order to obtain this reinforcement of cavalry, which was of so much consequence to him?

You must demand an explanation of the reasons which induced the Duke of Ragusa to offer battle without the orders of his commander-in-chief, and without waiting for the reinforcements which the King, as commander-in-chief of my armies of Spain, might have collected from the armies of the Centre, of Valencia, and of Andalusia?

The army of the Centre alone furnished 15,000 men and 2500 horse, which might have arrived at the very time when the Duke of Ragusa was occasioning the defeat of the French army; indeed, from his two armies the King might have brought to him 40,000 men.
Again, when the Duke of Ragusa knew that 1500 horse were on their way to him from Burgos, why did he not await their arrival?

Putting these two circumstances together—his taking up the offensive without the orders of his commander-in-chief, and his not postponing the battle for two days in order to receive the 15,000 infantry which the King was bringing to him, and the 1500 cavalry which were coming to him from the army of the North—one is inclined to think that the Duke of Ragusa was afraid of the King's sharing in his success, and that he sacrificed to personal vanity the glory of his country and the good of my service.

Order the generals of divisions to send returns of their losses. It is intolerable that false accounts should be sent and the truth disguised.

Order General Clausel, who is in command of the army, to send a return of the troops before as well as after the battle.

Ask the generals of the different corps also for precise returns.

At a fitting moment you will let the Duke of Ragusa know how much I am offended by his inexplicable conduct in not waiting two days for succours from the armies of the Centre and of the North.

I am anxiously expecting the arrival of the King's aide-decamp, that I may obtain some real information; what the King has written is of little value.

M. le Due de Feltre,—I think it advisable to put the Duke of Ragusa's justification into the 'Moniteur.' You must also insert the staff officer's report, describing the subsequent state of things, and an article, with the date of the day on which the King with his troops reached Olmedo, and that on which the cavalry from the army of the north arrived.

Ask General Clausel also to send you a detailed report, to be inserted in the 'Moniteur,' with some passages softened. The public will thus understand what has happened, and will see that the check which the Duke of Ragusa has sustained does not prevent our affairs in Spain from being prosperous, as our armies are excellent, and our losses are about equal to those of the enemy.
Posted by FAASouza