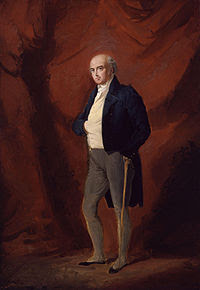 On September 26 1812, Lord Holland responds to Lord Byron's by providing his comments with respect to Byron's address for the Opening of the Drury Lane Theatre. Lord Holland appears particularly critical of the word "intellectual" that Byron had intended to use in one of his lines. Lord Holland writes: "Intellectual is a hea[v]y abstract Scotch metaphysical word & as such most repugnant to the language of the Muses – who have I suspect a very female dislike to moral philosophy and elements of criticism." Lord Holland's letter is reproduced below.

Cassiobury – Septr: 26 –
My dear lord -  I have but a moment as I am going to town where I shall find your prologue & be able to compare your corrections with the original – Perhaps it would be a good plan to get a few copies printed but what would be yet better would be for you to come up to Holland House the 9th of October & hear the actor who is to deliver [it], recite it – I think your four additional lines very good – and victors even without the allusion to Virgil better than patriarchs – but where the question is between an allusion to the Prince of Poets & the unintelligible nonsense of that Hebrew nation can there be a doubt? {worthies would be flat but it is {{an}} old phrase worthies of a line} – Intellectual is a heay abstract Scotch metaphysical word & as such most repugnant to the language of the Muses – who have I suspect a very female dislike to moral feelosofie & eeliments of criticism & c & c & c – but yet per contra I do not very much admire  geniusgifted – nor is manycoloured an authority, for many is a sort of adverb adjective in most or I  might say in many a language – multicolour – but I am really very impudent in criticising your words – there is no doubt that Johnson would have said intellectual & after all it is more perspicuous than the others & perspicuity both of language & argument or train of thought a great & necessary beauty in all poems is eminently so in one that is to be spoken to an audience who may be called Athenians in an address but whom those who write & those who speak [them] well know to be Pretorians – You cannot flatter me more nor occupy  more agreeably than by discussing epithets & words in your verses – Lady H begs me to say that remembrances are certainly unnecessary – but always flattering &  agreeable – she begs most kind ones in return – Yrs Vass ll Holland
Posted by FAASouza