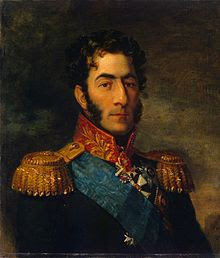 On September 24 1812, Prince Pyotr Ivanovich Bagration, a descendant of the Bagrationi Georgian royal dynasty, dies of the wounds sustained at the Battle of Borodino on September 7 1812. Count Louis Alexandre Andrault de Langeron describes Bagration in his memoirs this way:

"Nature had given a great deal to Prince Bagration, but education had added nothing. He was born with great bravery and a good military eye; great energy and was instinctively a good soldier. He had acquired the habit of war. [...] Bagration knew only one language, Russian, and even then he could write neither a report nor dispatch without grammatical faults. He had never read a book in his life, but he had a talent for consulting others, and his unerring, canny intelligence always lead him to choose the best path from amongst those suggested to him. [...] He also had one other very valuable talent, that of being able to inspire the adoration of all those who served under him. [...] He was a very precious man for Russia."

Alexander Mikaberidze provides a fine summary of Babration's achievements in 1812 when he writes:

Bagration’s skillful withdrawal in the face of superior French forces in the initial stages of the invasion, his adroit escape from Napoleon’s entrapment before Moghilev, his brilliant concentration with the 1st Western Army at Smolensk and his heroic defense of the fléches at Borodino, ensured the survival of the Russian army and the ultimate success of the homeland defense. Probably, the greatest recommendation for Prince Bagration and his abilities is that Napoléon considered him to be the finest general of the Russian army.