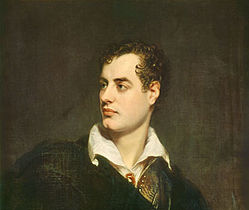 On September 24, 1812, Lord Byron is anxiously revising his address for the opening of  the Drury Lane Theatre. He writes three letters to Lord Holland with suggested changes to the lines of poetry that he has already sent.  Lord Holland is in on the Committee of the Drury Lane Theatre. The opening day is October 10, 1812. Byron writes: "I am anxious to do the little I can as desirably as Time & the Cheltenham waters will allow – to say nothing of my want of practice in this line of rhyming." Byron's letters are reproduced below.

Septr. 24. –
My dear Lord – I send a recast of the four first lines of the concluding paragraph

This greeting oer – the ancient rule obeyed,
The Drama’s homage by her Herald paid,
Receive our Welcome too, whose every Tone
Springs from our hearts, & fain would {win} your own,
The Curtain rises &c. &c.

And do forgive all the trouble; – see what it is to have do even with the genteelest of us!
ever yrs.
B

My dear Lord –  I must bore you still further with alterations as they rise. – Perhaps these couplets –

Friends of the Stage – for whom our voice we {raise}

Churchill has Player as a monosyllable frequently – Propound – pronounce, & excuse all this, which will show you that I am anxious to do the little I can as desirably as Time & the Cheltenham waters will allow – to say nothing of my want of practice in this line of rhyming. – ever yrs.
B

“livid wave” may be “glowing wave” burning – blazing – fiery – oh Lord – even “sulphurous” are all  bespoke “purple” “crimson” are too feeble – if you think of some hugeous epithet – in with it instead. –

My dear Lord – I believe this is the third scrawl since yesterday all about epithets. – I think the epithet “intellectual” must convey the meaning I intend & though I hate compounds for the present I will try (col’ permesso) the word – “Genius=gifted” patriarchs of our line” instead – Johnson has our “many=coloured life” a compound but they are always best avoided – however it is the only one in 90 lines, but will be happy to give way to a better. – I am ashamed to intrude any more remembrances on Ly. H. or letters upon you; but you are fortunately for me gifted with patience already too often triedby your obliged & sincere St.
Byron