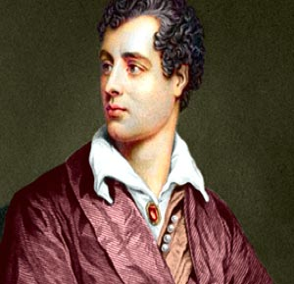 On September 27 1812, Lord Byron  continues to work on revisions to the Address for the opening of Drury Lane Theatre. He started a letter Lord Holland on September 26 and completes it on September 27.  The letters give some insight as to how Byron writes. For example, Byron explains:


I always scrawl in this way, and smoothe as much as I can but never sufficiently, & latterly I can weave a nine line stanza faster than a couplet, for which measure I have not the cunning. – When I began “Childe Harold” I had never tried Spenser’s measure, & now I cannot scribble in any other.

The letters are reproduced below.

My homage to Ly. H. – &c best thanks for her kind remembrances

My dear Lord -  You will think there is no end to my villainous emendations. –
5 & 6th. lines I think to alter thus –

oh Sight admired & mourned
“Ye who beheld – <and who forgets the sight)
When Radiance mocked the Ruin it adorned
“When burst the radiant Ruin into light?)

because “night” is repeated the next line but one, & as it now stands the conclusion of the paragraph “worthy him (Shakespeare) & you” appears to apply the “you” to those only who were out of bed & in Covent Garden market on the night of the Conflagration, instead of the Audience or the discerning public at large all of whom are intended to be comprised in that comprehensive & I hope comprehensible pronoun. –

“When Garrick died – & Brinsley ceased to write, ceasing to live is a much more serious concern, & ought not to be first therefore – I will let the old couplet stand – with its’ half rhymes “sought” & “wrote” second thoughts in every thing are best, but in rhyme third & fourth don’t come amiss – I am very anxious in this business & I do hope that the sorry trouble I occasion you will plead it’s own excuse, & that it will tend to shew my endeavour to make the most of the time allotted. I wish I had known it months ago, for in that case I had not left one line standing on another. – I always scrawl in this way, and smoothe as much as I can but never sufficiently, & latterly I can weave a nine line stanza faster than a couplet, for which measure I have not the cunning. – When I began “Childe Harold” I had never tried Spenser’s measure, & now I cannot scribble in any other. –

After all, my dear Lord, if you can get a decent address elsewhere, dont hesitate to put this aside; why did you not trust your own Muse? I am very sure she would have been triumphant, & saved the Committee their trouble, “tis a joyful one” to me but I fear I shall not satisfy even myself. – After the account You sent me tis no compliment to say, you would have beaten your candidates, but I mean that in that case there would have been no occasion for their being beaten at all. – There are but two decent prologues in our tongue – Pope’s to Cato – Johnson’s to Drury Lane, this with the Epilogue to the “Distrest Mother” & I think one of Goldsmith’s, and a prologue of Old Colman’s to Beaumont & Fletcher’s Philaster are the best things of the kind we have. –

My dear Lord – I have just received your very kind letters, & hope you have met with a second copy corrected & addressed to H[olland]. H[ouse]. with some omissions & this {new} couplet “<when> {as} glared each rising flash & ghastly shone

“The skies with lightnings awful as their own.

As to remarks I can only say I will alter & acquiesce in anything. – With regard to the part which Whitbread wishes to omit I believe the address will go off quicker <but> without it though like the agility of the Hottentot at the expence of one testicle. – I leave to your choice entirely the different specimens of stucco work, & {a} brick of your own will also much improve my Babylonish turret. – – I should like Elliston to have it with your leave. – <Mou> {“Adorn”} & “mourn” are lawful rhymes in Pope’s <elegy> {Death} of the {unfortunate} Lady; – Gray has “forlorn” & “mourn” – & “torn and mourn” are in Smollet’s famous “tears of Scotland” – – As there will probably be an outcry amongst the rejected – I hope the Committee will testify (if it be needful) that I sent in nothing to the Congress whatever with or without my name as your Lordship well knows. – All I have to do with it is with & through you, & though I of course wish to satisfy the audience – I do assure you my first object is to comply with your request, – & in so doing shew the sense I have of the many obligations you have conferred upon me. yrs. ever B. –