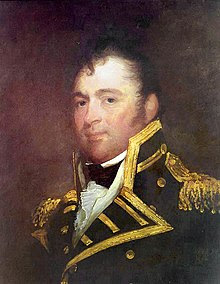 On November 13, 1812, Commodore Chauncey writes to the Secretary of the Navy to report on the attack on Kingston Harbour:

Commodore Chauncey to the Secretary of the Navy
Sackett's Harbor, 13th Nov., 1812.

Sir,—I arrived here last evening in a gale of wind, the pilots having refused to keep the lake. On the 8th I fell in with the Royal George and chased her into the Bay of Quinte, where I lost sight of her in the night. In the morning of the 9th we again got sight of her lying in Kingston channel. We gave chase, and followed her into the harbor of Kingston, where we engaged her and the batteries for one hour and forty-five minutes. I had made up my mind to board her, but she was so well protected by the batteries and the wind blowing directly in, it was deemed imprudent to make the attempt at this time; the pilots also refused to take charge of the vessels.

Under these circumstances, and it being after sundown, I determined to haul off and renew the attack next morning. We beat up in good order under a heavy fire from the Royal George and batteries to Four Mile Point, where we anchored. It blew heavy in squalls from the westward during the night, and there was every appearance of a gale of wind. The pilot became alarmed, and I thought it most prudent to get into a place of more safety. I therefore (very reluctantly) deferred renewing the attack upon the ships and forts until a more favorable opportunity.

At 7 a. m. on the 10th I made a signal to weigh, and beat out of a very narrow channel, under a very heavy press of sail, to the open lake. At 10 we fell in with the Governor Simcoe, running for Kingston, and chased her into the harbor. She escaped by running over a reef of rocks under a heavy fire from the Governor Tompkins, the Hamilton and the Julia, which cut her up very much. All her people ran below while under the fire of these vessels. The Hamilton chased her into nine feet of water before she hauled off. We tacked to the southward with the intention of running to our station at the Ducks, but it coming on to blow very heavy the pilots told me that it would be unsafe to keep the lake. I bore up for this place, where I arrived last night.

In our passage through the Bay of Quinte I discovered a schooner at the village of Ernestown, which we took possession of, but finding that she would detain us, (being then in chase of the Royal George?) I ordered Lieutenant Macpherson to take out her sails and rigging and burn her, which he did. We also took the schooner Mary Hatt from Niagara at the mouth of Kingston harbor, and took her with us to our anchorage. The next morning, finding that she could not beat through the channel with us, I ordered the sailing-master in the Growler to take her under convoy and run down past Kingston, anchor on the east end of Long Island and wait for a wind to come up on the east side. I was also in hopes the Royal George might be induced to follow for the purpose of retaking our prize, but her commander was too well aware of the consequences to leave his moorings.

We lost in this affair one man killed and three slightly wounded, with a few shot through our sails. The other vessels lost no men and received but little injury in their hulls and sails, with the exception of the Pert, whose gun bursted in the early part of the action and wounded her commander, (Sailing-Master Arundel,) badly, and a midshipman and three men slightly. Mr. Arundel, who refused to quit the deck although wounded, was knocked overboard in beating up to our anchorage and, I am sorry to say, was drowned.

The Royal George must have received very considerable injury in her hull and in men, as the gun vessels with a long 32-pounder were seen to strike her almost every shot, and it was observed that she was reinforced with men four different times during the action.

I have great pleasure in saying that the officers and men on board of every vessel behaved with the utmost coolness and are extremely anxious to meet the enemy on the open lake, and as long as I have the honor to command such officers and such men I can have no doubt of the result.

I think I can say with great propriety that we have now command of the lake, and that we can transport troops and stores to any part of it without any risk of an attack from the enemy; although the whole of his naval force was not collected at Kingston yet the force at the different batteries would more than counterbalance the vessels that were absent. It was thought by all the officers in the squadron that the enemy had more than 30 guns mounted at Kingston and from 1,000 to 1,500 men. The Royal George, protected by this force, was driven into the river harbor under the protection of the musketry by the Oneida and four small schooners fitted out as gun boats, the Governor Tompkins not having been able to join in the action until about sunset owing to the lightness of the winds, and the Pert's gun having burst the second or third shot.

We are replacing all deficiencies and I shall proceed up the lake the first wind in the hopes to fall in with the Earl Moira and the Prince Regent; at any rate I shall endeavor to prevent them from forming a junction with the Royal George again this winter. I shall also visit Niagara river if practicable, in order to land some guns and stores that I have taken on board for that purpose. If the enemy are still in possession of Queenston, I shall land them a few miles below. I shall have the honor of writing you more in detail upon this subject on my return, or perhaps before I leave here if the wind continue ahead.