November 20 1812: Southey and the Evangelical Mind 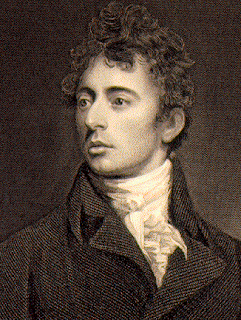 On November 20, 18120, Robert Southey writes a curious letter to his friend Grosvenor Charles Bedford where he discusses an evangelical admirer of his poem  Thalaba the Destroyer. John Martyn Longmire had written to Southey admiring the poem and pointing out all sort of parallels between the poem and biblical stories.  Southey wants to be polite but it is clear that he does not share the religious significance and worldview of his admirer. This blog has not taken into account the importance of the religious changes that are taking place in Britain. It is important to remember that the evangelicals were gaining adherents and the "religiosity" and worldview that this brought was reshaping culture and politics in very important ways. In Southey's letter, one sees a bemused attempt to grapple with the evangelical perspective. He finds it "very delightful to a fanciful & ingenious mind in the discovering types & symbols everywhere." At the same time, he does not know whether he believes the stories of the bible, such as the story of Isaac and Abraham,  are true. More telling, in his words, "nor have I thought it of sufficient importance seriously to ask myself whether I do or not."

If you could see Mr Evangelicals application of Thalaba you would never be able more to ask think of any scriptural shadowings in the conduct of the poem.   It is a curiosity of the first water. As yet I have only read the first page & the last. It begins with a text from Ephesians & ends with the Lamb that sitteth on the throne.   – What in the name of all Saints shall I say to this homo that will satisfy him, & yet steer clear of any thing construable into hypocrisy?

With regard to the sacrifice of Isaac,  it is necessary to premise that I do not believe the plenary inspiration of the scriptures: that an opinion which appears to me utterly untenable, & of the most mischievous consequences. I believe therefore in the general truth of the scriptural history, – as I do in that of any other authentic historical work, – & of course disbelieve altogether such parts as come to me with a character of incredulity. This is heresy.

The sacrifice of Isaac is said to be typical. There is something very delightful to a fanciful & ingenious mind in the discovering types & symbols every where: but any person who knows how the Romanists have done this will always suspect such hidden significations.

I do not know that I believe the story, nor have I thought it of sufficient importance seriously to ask myself whether I do or not. – If I did believe it entirely, I should be equally ready to praise Abraham for an act of faith in his obedience, – or to have praised him for a more enlightened rational piety, if he had suspected the voice which ordered the sacrifice, to be a delusion or a temptation.

There is however a parallel in the two cases. Thalaba is not commanded to kill Laila.  The Angel says he is to receive her spirit from his hands; & when the Prophet voice from above speaks it tells him that she must die for him, or he for her. He could not be the being which I have conceived him to be, if he had made any hesitation.