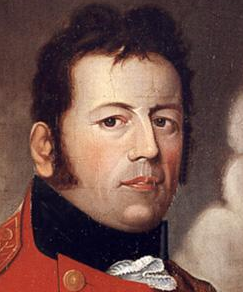 On November 21, Sir George Prevost, at his headquarters in Chambly in Lower Canada, reports to Lord Bathurst on the attack on Kingston Harbour by Commodore Chauncey:

My Lord,—I have the honor to acquaint Your Lordship that the efforts of the enemy at Sackett's Harbor enabled them out on the 10th instant seven sail of armed vessels, manned by the crew of one of the American frigates and commanded by some of their naval officers, having on board a considerable detachment of troops for the purpose of carrying the port of Kingston by surprise and of destroying His Majesty's ship Royal George then lying there. I have much satisfaction in reporting to Your Lordship that the vigilance and military skill of Colonel Vincent, who is in command at Kingston, frustrated their designs, and after many hours of ineffectual cannonade the American flotilla hauled off,and on the following day' returned into port.