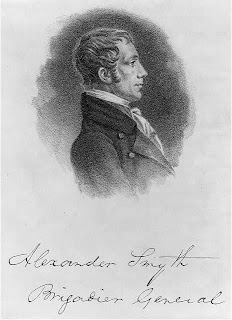 On November 28, 1812, Captain King, having been captured by the British, writes to  General Smyth, asking for negotiations to release him and his men.  "A trip to Quebec," he writes, "at this season of the year under any circumstances would be extremely disagreeable, but particularly as a prisoner of war."

Dear General,—At the very moment that the boats, (probably coming to my relief,) made their appearance yesterday morning, Major Ormsby, at the head of the British army, arrived and halted in front of the house into which I had thrown myself, with an intention to defend it against any force not greatly superior, but against the troops under his command it would have been folly to resist, and I surrendered myself and thirty men prisoners.

To Captains Morgan and Sproul and Lieutenant Houston, (the only three officers who remained with me,) I refer you for an account of my conduct in the attempt on the batteries, as also of the partial success of the enterprise, which, when you receive and take into consideration that the boats carried off the implements for spiking the guns and destroying the gun carriages, I flatter myself you will be convinced I did my duty as far as circumstances rendered it possible.

May I flatter myself you will exchange the prisoners of the Forty-ninth I sent over, and which exceeds in number those taken with me, for the mennow here, the names of which I enclose you. For myself I am less interested, but could I be exchanged for the surgeon I sent over, it would be highly gratifying. By releasing my prisoners I could have made my escape with all my men, but I deemed the measure I pursued more honorable andtherefore adopted it, and flatter myself it will meet your approbation.

I received a shot in the foot at the Red House. The wound itself is trifling, but having been obliged to march the greater part of the way from where I was taken to Chippawa, it caused considerable swelling and to-day is painful. I also received a scratch on the cheek, but fear it is not even deep enough to leave a scar.

A trip to Quebec at this season of the year under any circumstances would be extremely disagreeable, but particularly as a prisoner of war, therefore if possible negotiate my exchange, but whatever you may do, my dear sir, let the men taken with me be released. Should any letters come for me under cover, please keep them until you know what is to be my fate.

I am treated with a degree of politeness that entitles the officers of this garrison to my warmest gratitude.
Posted by FAASouza