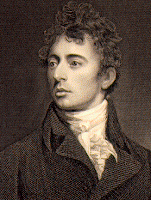 Guy Faux  is receiving his usual honours of bonfire & uproar in the market-place: the two girls are exhibiting themselves at the dancing-masters ball as happy as innocent hearts & apple-green kid-shoes can make them; good old nurse is twirling the spinning wheel in the room where Mrs Southey is in bed with her new-born daughter Isabel, & I, who like the last Duke of Cumberland am all alone by myself, take pen & paper to inform you of this daughters safe arrival.

Southey's letter is reproduced below.


My dear Sir - Guy Faux is receiving his usual honours of bonfire & uproar in the market-place: the two girls are exhibiting themselves at the dancing-masters ball as happy as innocent hearts & apple-green kid-shoes can make them; good old nurse is twirling the spinning wheel in the room where Mrs Southey is in bed with her new-born daughter Isabel, & I, who like the last Duke of Cumberland am all alone by myself, take pen & paper to inform you of this daughters safe arrival.


I have desired Longman to send you a book of shreds & patches,  the work of many hours of that sort of laborious idleness, which is to me the most delightful of all dissipation. You will find some things to smile at, & some curious facts affording matter for speculation, from which it is not impossible that scientific men may draw important conclusions of some importance. I inserted some things <articles> of Coleridges in the book, merely in the hope of getting some thing from him in this way, – he had literally only to cut them out of his commonplace books. it was my intention to make four volumes instead of two in this manner; – but he kept the press waiting fifteen months for an unfinished article, so that at last I ordered the sheet in which it was begun to be cancelled in despair. I have marked whatever is his, & you will wish that it were more.


My intended journey to London is postponed till spring, because it is expedient that the Register  for 1811 should be published in April, & this therefore allows me no time to stir from home. I am busily employed upon it, & have this day got over in as summary a manner as possible the Bullion business, – a part to which I looked on with as much horror as ever Christian did to the Slough of Despond, or the Hill of Difficulty.  This is a very laborious work; it does not weary me, – nevertheless as it commenced with the usurpation of Spain, [7]  the first instance in which Buonaparte unequivocally displayed himself in his true character of pure Devil, I should be well pleased to bring my part in it to a conclusion in his fall: an event which I verily hope is not far distant. This murderous war in Russia, since it has become not a political game at war for territory, but a national cause, in which men fight for to save their wives & children, or to revenge them, – promises to become as fatal to France as the Spanish contest has been;  & a daybreak of hope has appeared even in Paris itself.  Should he leave his army to prevent the danger of another insurrection. I hardly think, composed as it is of so many different people, all forced to serve, & hating him for whom they are sacrificed that it can be kept together: & should he continue with it, there is good hope that a winter at Moscow may involve him & his army in the same destruction, – or that a more succesful attempt at deliverance may be made in France, & that she may refuse any longer to supply so wicked & so wanton a waste of life. Oh that there were but energy enough in our Government to publish the terms upon which it is ready to make peace with France. – at the same time pledging itself never to make peace with this frantic tyrant! What an instrument would such a declaration have been in the hands of these Generals at Paris!


Curwen has been thrown out at Carlisle merely by the infamy of his private character. His election would have been certain, if he could have dared to face the stories which would have risen in judgement against him. This is at least a triumph of public decency. He has got into a sort of sentimental intrigue with the eldest Miss Watson, concerning which he has written a letter of exculpation to Spedding, – confessing imprudence, & protesting <his> innocence. The country rings with this scandalum magnatum,  the common people see a sort of sacrilege in intriguing with a Bishops daughter – others half lose the feelings which his intimacy with the old Bishop have occasioned, in astonishment at his folly; – for that grossest & most outrageous imprudencies have take place is beyond all doubt.


So much for Cumberland scandal. Of other news the best is that our friend Miss Barker is settled in the next house. White-Widow,   as she was called, having married the first man who asked her, – a good riddance for us. The wet October which we have had, has spoilt Calverts corn upon the top of Lattrig, which would else have been an abund a most profitable crop. The floating island attempted to rise about six weeks ago, but did not reach the surface. You heard of the failure of the Workington bank, – I have five & twenty of their notes, but am better off than many of my neighbours. Spence has left the country & sold his house to Mr Morsehead (son of Sir John M.)  – who keeps a mistress in it, in more open scandal than his predecessor. Lord William has bought Marshalls house, [18]  & I hope will improve his <its> appearance. His property will be prodigiously increased by an inclosure which is about to take place of all the fells between Derwent & Buttermere. Methinks this is a tolerably good Keswick Gazette.


And now let me ask you whether little Mary  is yet provided with a play-fellow? & how you & Mrs B. & your daughters  have been during the long interval which (by our own fault) has elapsed since we have heard of you. Is Wade [21]  at his new school? And does he not sometimes wistfully remember not the fleshpots of Keswick, but the great fish of Keswick Lake?

Mrs S. joins in the kindest remembrances with my dear Sir
Yrs most truly


Lucien Buonaparte  has made his arrangements for publication with Murray, & no doubt his poem will be consigned to my critical care. This has long been settled. My own poem  of which I had the pleasure of showing you the commencement, is rapidly proceeding. I had a curious letter last week from an Evangelical Clergyman, requesting that he might send me the moral of Thalaba, & telling me that it had strengthened his faith.
Posted by FAASouza