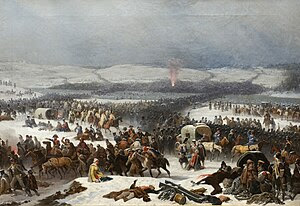 On November 26 1812, the Grande Armee continues the retreat by crossing on a newly constructed bridge over the Berezina River. Russian armies are in front and two other armies are coming from behind. Chaos reigns, but Napoleon is able to save his army from total destruction, by a virtuoso display of military maneuvering admittedly in a lost cause. One soldier amid the confusion and chaos is Jakob Walter:

Finally, toward four o'clock in the evening, when it was almost dark, I came to the bridge. Here I saw only one bridge, the second having been shot away. Now it is with horror, but at that time it was with a dull, indifferent feeling, that I looked at the masses of horses and people which lay dead, piled high upon the bridge. Only "Straight ahead and in the middle!" must be the resolution. "Here in the water is your grave; beyond the bridge is the continuation of a wretched life. The decision will be made on the bridge!" Now I kept myself constantly in the middle. The major and I could aid one another; and so amid a hundred blows of sabers we came to the bridge, where not a plank was visible because of the dead men and horses; and, although on reaching the bridge the people fell in masses thirty paces to the right and to the left, we came through to the firm land.