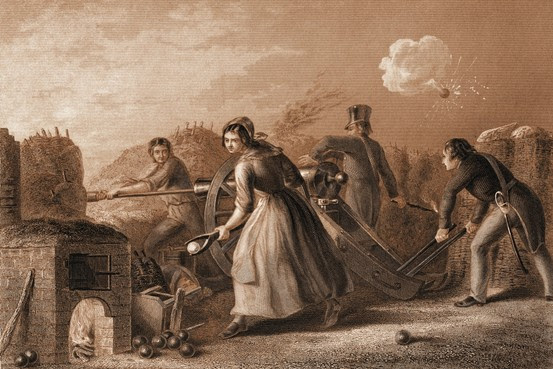 On November 21, 1812, at six o'clock the British batteries at Fort George begin to fire on the American garrison at Fort Niagara. The cannonade lasts until sundown with various buildings set on fire. The Americans reply with their own guns firing across the Niagara River to Fort George. Colonel McFeeley will recall: "Our garrison was not as well provided with artillery and ammunition as I could have wished; however, the batteries opened a tremendous fire upon them in return, with hot shot, admirably well directed."

The incident is also noteworthy because of the exploits of Betsy Doyle during the attack. Betsy is the mother of four whose husband was captured at the Battle of Queenston. He is being held as a prisoner of war by the British. On November 21, after  some of the gunners are wounded, Betsy stepped in to help. The Americans were loading "red hot shot" or cannonballs heated red hot into their guns to fire at Fort George.  As the historian, Catherine Emerson notes, this was done to set  fire to Fort George’s wooden buildings. Betsy helped bring the "red hot shot" from the fireplaces downstairs to the guns on the roof of the Stone Mess Hall. Colonel McFeeley will report to General Smyth:

An instance of extraordinary bravery in a female (the wife of one Doyle, a private in the United States Artillery, made a prisoner at Queenston,) I cannot pass over. During the most tremendous cannonading I have ever seen, she attended the six-pounder on the mess-house with red hot shot, and showed fortitude equal to the Maid of Orleans.

The exchange of fire will continue until sunset. At one point, all the Americans run out of  gun cartridges used in the guns so they "cut up their flannel waistcoats and shirts, and the soldiers their trousers, to supply their guns." Colonel McFeeley will report: "The enemy threw more than two thousand red hot balls into it and a number of shells, amounting to more than 180, only one of which did injury to our men." After the attack has ended the Americans have suffered four dead and seven wounded with parts of Fort Niagara in flames.

The British sustined some damages to their barracks in Fort George and suffered two deaths.

The above account is taken from that of Colonel George McFeeley to Brigadier-General Smyth found here  and the article  by Catherine Emerson found here.  The picture is from here.