On August 12 1812, Ludwig Beethoven writes to his patron the Archduke Rudolph:

To the ARCHDUKE RUDOLPH
Franzensbrunn, August 12, 1812. 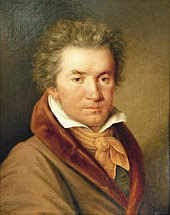 It has already long been my duty to recall myself to your memory, but partly being occupied about my health, partly my unimportance caused me to hesitate. — In Prague I missed Y.I.H. by one night, for when I went to pay my respects to you, you had already left the night before. In Teplitz I heard every day Turkish music four times ; that is the only piece of musical news that I can offer. I was a great deal with Goethe. From Teplitz my doctor Staudenheim ordered me off to Carlsbad, from there back again here, and probably I shall have to return once again to Teplitz — what a running about! and yet how little certainty is there that my present state of health will improve! With regard to the health of Y.I.H. I have up to now always received most favourable news, also of your continued affection for, and devotion to the Musical Muse. Y.I.H. will have heard of the concert which I gave with the assistance of Signore Polledro for the benefit of those who had suffered from the fire at Baden.

The receipts amounted almost to 1000 florins, and if the better arrangements I proposed had been carried out, 2000 florins would easily have been taken. As a matter of fact it was a Poor Concert for the Poor. Here at the publishers I only found some of my early pianoforte and violin sonatas. As this Polledro insisted, I had to content myself with playing an old sonata — The whole programme consisted of a Trio by Polledro, my Violin-Sonata, then again something played by Polledro, and finally an improvisation by myself. — Anyhow I am truly glad that the unfortunate Baden people got something from it. — Deign to accept my wishes for your prosperity, and the request graciously to bear me in remembrance.
Yours, most obediently,
Ludwig van Beethoven.