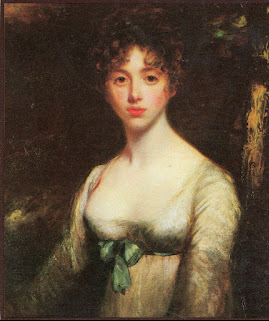 On August 9 18123, Lady Caroline Lamb is still distraught and somewhat unbalanced from the fact that Lord Byron has ended their affair. She still cannot let go of Byron. She continues to write feverishly to him in the hope of drawing him back. Today, she has an idea. A brilliant and macabre idea that will catch Byron's attention and may even amuse him. After some delicate procedures, she sits down at her desk. Perhaps she smiles at her cleverness as she writes. Perhaps her large hazel eyes betray a strange cracked intensity. She finishes her note and encloses a small packet. The packet contains her auburn pubic hair tinged with her blood because she has cut the hair to close to the skin. She asks in her note for Byron to reciprocate:

I asked you not to send blood but yet do - because if it means love I like to have it. I cut the hair too close & bled much more than you need - do not you the same & pray put not scizzar points near where quei capelli grow - sooner take it from the arm or wrist - pray be careful.

In another note from that day, she writes:

What must of Byron have thought when he received the notes and packet? Did he laugh  appreciating the macabre nature of the gift? Did he recall that she had promised him her blood on July 29? Did he think back to when he was first introduced to her on March 25, coincidentally the same day that he saw his future wife Annabella Millbanke. Byron would later write of that day:"The first time of my seeing Miss Milbanke was at Lady ****'s. It was a fatal day; and I remember, that in going up stairs I stumbled, and remarked to Moore, who accompanied me, that it was a bad omen. I ought to have taken the warning." He had been flattered then by Caroline's attraction to him. His own physical attraction to her had been more ambiguous but still very real. Did the macabre package make him think of their first night together. "When the evening of consummation finally came," Byron's biographer Fiona MacCarthy writes, "the apparatus with which he surrounded the evening was 'almost incredibly absurd - her head resting upon a  skull, a case of loaded pistols between them". Now months later, she had sent him a little gift, a memento of their affair. Byron must have smiled, and vowed that he must not see her again. Caroline possessed a madness made for literature but in life she would consume them both.