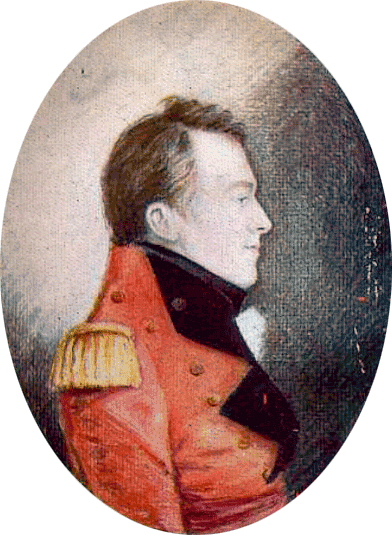 On August 4 1812, the Executive Council of Upper Canada, after a night's deliberation, informs Major General Isaac Brock, that it was their unanimous opinion that it was expedient to prorogue the legislature immediately and proclaim martial law. Earlier, Brock  writes to Colonel Baynes and Sir George Prevost, both in Lower Canada. Brock is asking for more troops but it is clear that he intends to move to Fort Malden, or Amherstburg. His main concern is that Militia may not move with him as the Native tribes and nations residing in the Grand River have elected to remain neutral. The Militia will not move for fear that their families will be exposed to Native attacks. Frustrated, Brock contemplates removing the Native nations. He writes:"The moment Government be in a condition to do itself justice, the first step ought to be to expel the Indians from their present residence and place them out of the reach of doing mischief". His patience with the House of Assembly is also at an end. While writing to  Prevost he learns that the House almost passed a bill that would have allowed the Militia to return home if they did not receive their pay on a fixed day in each month. Brock will prorogue parliament tomorrow on August 5 1812. The letter to Prevost is full of queries as to the extent of his power if he were to declare martial law.  These letters are produced below.

My dear Colonel - I shall probably not have to trouble Sir George by this conveyance. He must by this time be in full possession of the state of this Province — He must be sensible that considerable reinforcements are absolutely necessary, and that without them my Situation will very soon become very critical

The House of Assembly have refused to do any one thing they are required — The truth is that, with of course few exceptions, every body Considers the fate of the Country as already decided, and is afraid to appear conspicuous, in the promotion of measures in the least calculated to retard the catastrophe.

I cannot hear what is going on at Amherstburg. I begin to be uneasy for Procter, should any accident befall him I shall begin to despond for the fate of Amherstburg — I am collecting a force at Long point with a view to afford him relief, but until I receive information of the state of affairs in that quarter, I cannot move. The last letter f Col. St George is dated the 15th written three days after Gen. Hull crossed the River with his army — Mr. Baby coming the Militia who has arrived here to attend his parliamentary duties, brought accounts to the 20th on which day, and at the very moment he was setting off, an attack was making on our post, the particulars of which he, of course, is unable to relate, but he heard that Some one had arrived from the field and stated that the enemy was retiring — An Indian has Since reported that he counted 30 dead bodies, and that the Americans had besides many wounded — This attack must have been made in great force — the instructions contained in the Governor's Commission authorize me to proclaim Martial Law in the event of invasion and by the 4th art of the 24 Sec: of the Mutiny Act " the General, Governor, or Ofjicer Commanding in Chief for the time being is to appoint General Courts Martial" &c. I am in doubt whether I come within the above description — I neither Command in Chief, nor have I the King's Sign Manual to enable me to approve of the sentence of Courts Martial — These are delicate considerations — I believe I should resort to the experiment of declaring Martial Law, but for the above doubts, which cause me to hesitate — Do Militia Officers act during Martial Law indiscriminately with officers of the line? I am told the instant the law is promulgated the Militia will disperse. It may be so, but on the other hand I am convinced that unless strong coercive measures be adopted to restrain the infamous proceedings of the disaffected the province will be lost even without a struggle — A petition has already be (en) carried to Gen' Hull signed by many inhabitants about Westminster inviting him to advance with a promise to join him — What in the name of heaven can be done with such a vile population — The ungrateful and infamous conduct of the Indians on the Grand River is still more mortifying. These fellows, give me every inquietude. They afford the Militia a plausible pretext for staying at home  — They do not like leaving their families within the power of the Indians — The moment Government be in a condition to do itself justice, the first step ought to be to expel the Indians from their present residence and place them out of the reach of doing mischief — My thoughts have been directed to the measures necessary to be adopted to Secure in case of necessity a retreat. The 41°' is  necessarily so Much scattered that I find the utmost difficulty to arrange any plan — I scarcely think the enemy will attack my front. He probably will prefer making a discent at Sugar Loaf, and another of greater magnitude half way to the head of the Lake or Burlington bay — I shall find the utmost difficulty to concentrate my small force for the instant I quit any part of the frontier a force it is reasonable to expect, will be in readiness to cross and press my rear — The Indians will then shew their true disposition, And as human nature in all instances in which it determines to forsake and act against a benefactor is found infinitely more rancorous and cruel, every thing horrid must be expected to be committed

I intended to have restored Lt Cartwright to the Society of the 41st but the officers requested that I should save them the mortification. The fact is the general conduct of that officer has not given satisfaction — I of course could not press the measure, I have recommended his going to Quebec.

Do, my dear Colonel, write frequently independently of the post, and give me hopes of more troops — A raiment between Kingston and Montreal, and another here would change the face of affairs materially.

Sir, I have the honor to enclose a statement made by me yesterday to His Majesty's Executive Council which will fully apprize Your Excellency of my situation — The Council adjourned for deliberation, and I have no doubt will recommend the prorogation of the Assembly, and proclamation declaring Martial Law, but doubts occurred in contemplation of such an event, which I take the liberty to submit to your Excellency, and request the aid of your experience and Superior judgment —

2nd  Can I put upon a General Court Martial, after Martial Law is proclaimed, any Person not a Commissioned Officer in His Majesty's regular forces — In other words, can Militia Officers sit in conjunction with those of the line — ?

Your Excellency, I feel confident, will readily excuse the direct manner which I presume to put my queries — Should Militia Officers be debarred sitting, the proclamation of Martial Law will be a perfect nullity — There is now a want of a sufficient number of Officers at any one place in this widely extended Province to compose a Court Martial and unless Militia Officers be admitted as members, the Law cannot operate —

I am this instant informed that a motion was made in the House of Assembly and lost only by two voices that the Militia should be at liberty to return home if they did not receive their pay on a fixed day in each Month — ^Your Excellency will be sensible of the necessity of furnishing the Officer of the Commissariat at each post with the means of satisfying their demand — A paper medium would, I think, answer every purpose

I had no idea of being detained here so long, and my dispatches being forwarded where I expected to be, prevents my announcing their contents to your Excellency by this oppor-
tunity —