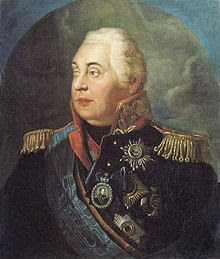 On August 20 1812, Tsar Alexander signed the decree appointing Prince Mikhail Illarionovich Golenishchev-Kutuzov as the new commander-in-chief of the Russian armies replacing Barclay de Tolley. The Tsar had established on August 17 a committee of his senior ministers to consider who should lead the armies. The committee chose Kutuzov despite the fact that its members understood that the Tsar detested Kutuzov blaming him for the defeat at Austerlitz. Kutuzov also had the disadvantage of being 66 years old, overweight and blind in his right eye after having been shot in the right temple in 1774. It took the Tsar three days to be reconciled with the choice. On August 20, the Tsar wrote to Barclay and Bagration:

Various grave complications coming after the two armies united, have impelled me to appoint one commander above all others. I have chosen for this post the General of Infantry, Prince Kutuzov, under whose command I place all four armies.

After being appointed commander-in-chief, Kutuzov went to the Cathedral of Our Lady of Kazan.  Adam Zamoyski writes, "There, taking off his uniform coat and all his decorations, he lowered his great bulk to his knees and began to pray, with tears pouring down his face."