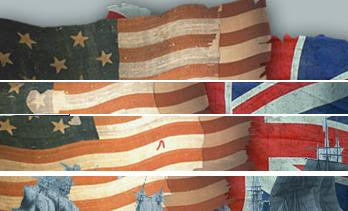 On August 28, 1812, Major Lovett writes to Abraham Van Vechten. Lovett is at Lewiston, the American Army's headquarters in the Niagara Region. He is a poet, lawyer, Federalist and opposed to the war. Still, as an American, he feels the humiliation of Hull's surrender of Detroit. Lovett writes: "Hull's surrender is to me incomprehensible." Yesterday, Lovett saw the prisoners from Detroit being marched across the river on their way to York and then to Montreal:


Yesterday, I beheld such a sight as God knows, I never expected to see, and He only knows the sensations it created in my heart. I saw my Countrymen, Free-born Americans, robbed of the inheritance which their dying Fathers bequeathed them, stripped of the arms which achieved our Independence and marching into a strange land by hundreds as black cattle for the market !! ...The sensations this scene produced in our camp were inexpressible: mortification, indignation, fearful apprehension, suspicion, jealousy, dismay, rage, madness.

Lovett also writes about the rumours that Hull had acted from complete fear and was a coward. Lovett writes:


I saw a gentleman who had this day seen one of Hull's Captains also openly and roundly asserted that Hull was a coward. That as soon as the first gun was fired he sat down with his back against a solid protection.

Lovett's letter is reproduced below.

Dear Sir, It is an observation of Cicero's that "those things which we see with our eyes, make a deeper impression on our minds, and we longer retain them in our memory, than those things which we hear with our ears." Now Sir, in this letter, I shall have occasion to touch upon some things which I have seen, and I confess to you they have made a pretty deep impression on my mind. Things are bad enough now. I do not speak of our little Camp: we are snug, getting in fine order, and with infinite, unceasing industry preparing for the worst, while we hope for the best. I speak on the general scale of all things around us. Hull's surrender is to me incomprehensible. I had expected his destruction would be certain, but it has come in such a way as I did not expect. Three of his officers say, he had a force of 2,200; the British all around assert that he has surrendered between 2,500 and 3,000; his provisions were ample for 3 more weeks; of ordnance and every munition of war he had abundance, yet he surrendered to a force vastly inferior, probably to 600 or 700 British Troops, and about the same number of Indians. He fired not a gun, and but one was fired at him. Then why did Hull surrender, is the question? No one here can answer. From his Officers, and all I have seen it appears that there was through the whole army a very great disaffection towards Hull. Cowardice is pretty generally imputed to him. Many allege corruption, his officers seem greatly distressed at the character of the surrender. Now the Consequences of this affair cast such a blot on the American character as the tears of your children and mine and an hundred more generations can never sponge away.

This event has cemented Canada beyond any thing you can conceive. It has a serious effect also on our Indians on the whole Frontier. The affair with Gen Harrison gave them the scent of blood and you may depend on it, it has been well improved. Tecumsich the Prophet's Brother, a warrior of almost unbounded influence, now openly holds the language: that the Great Spirit intended the Ohio River for the Boundary between his white and red children. That many of the first warriors have always thought so: but a cloud hung over the eyes of the tribes and they could not see what the Great Spirit meant. That Gen. Brock has now torn away that cloud, and the Indians see clearly that all the white people must go back east of the Ohio, and if one attempts to cross that river "Indians will cut their Toes off." Yesterday, I beheld such a sight as God knows, I never expected to see, and He only knows the sensations it created in my heart. I saw my Countrymen, Free-born Americans, robbed of the inheritance which their dying Fathers bequeathed them, stripped of the arms which achieved our Independence and marching into a strange land by hundreds as black cattle for the market !!

Before and behind on the rightand on the left their proud victors gleamed in arms, and their heads erect with the pride of victory. How many of our unfortunate Brethren were in this situation I know not; the road for more than a mile is perfectly in our view I think the line, including wagons, pleasure carriages etc. was half a mile long, scattered. The sensations this scene produced in our camp were inexpressible: mortification, indignation, fearful apprehension, suspicion, jealousy, dismay, rage, madness. It was a sad day with us, but the poor fellows last evening went on board the shipping and I presume passed over to York [Toronto.] I saw a gentleman who was present when Gen. Hull alighted from his carriage at Fort George, hale, corpulent and apparently in high spirits, and hence will he ever return? He goes to Quebec. ["General Hull and the regular officers, and soldiers were reserved for the triumphant entry of the British officers into Montreal and Quebec. Thither they were taken, and Hull himself, seated in an old, ragged, open carriage, was drawn through the streets of Montreal, and thus exhibited as a rare show, to the natives there assembled."] Such the scenes before us; all eyes seem now turned on General Van Rensselaer, for direction and on our little army for defence. I tell you that nothing but the man who is now on the ground could prevent incalculable mischief in this quarter. It is his Respectability and character which effects all that is effected, and I am proud to say, he is assiduously, vigilantly and ably supported; we have plenty to do from the 4 o'clock morning Gun until 9 at night. I acknowledge with many thanks the receipt of your letter of the 4th. The General and myself heartily acquiesce in the sentiments it contains: But you kill Solomon. Should you plume a Game-cock in the feathers of an Ostrich, it would not alter him: it could not. He would be a Game-cock still. He is a vastly valuable man in an Army. Our little Army improves very fast and under his discipline, from 4 in the morning until 8 at night, something is constantly going on. 6, P. M. I had hoped for leisure to complete my letter, but the afternoon has been every moment taken up.

I saw a gentleman who had this day seen one of Hull's Captains also openly and roundly asserted that Hull was a coward. That as soon as the first gun was fired he sat down with his back against a solid protection. Don't forget my dear temporary widow and little ones; tell her I live like an Indian Chief in my Tent alone; and that my General has promised to make me Governor of Michigan —if I will take it.