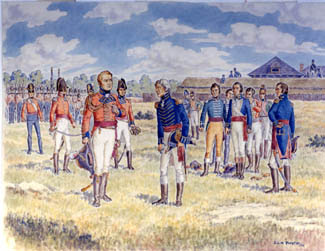 On August 16 1812, General William Hull surrenders Fort Detroit without firing a shot.  Brock and Tecumseh had marched to Detroit with about 300 regular troops, 400 militia and  600 native warriors. Hull had about 582 regulars and 1,600 militia. Morning began with Brock ordering the bombardment of the fort from British vessels and guns. One cannon ball killed the unfortunate Porter Hanks, who had been the commanding officer at Fort Mackinac when it surrendered on July 17. The British had paroled him and he had come to Detroit to answer for his surrender.

The repeated bombardment appears to have caused little damage but caused a great deal of fear. Hull became unhinged with the repeated war cries coming Native warriors. He believed that a massacre was inevitable and that the Natives would kill everyone. It is worth remembering that his son Abraham, and his daughter and grandchild were in the fort. The pressure was so much that he gave the order to surrender. Other officers refused to carry out a white flag but Hull`s son brought out the white flag to an astonished Brock and Tecumseh.  Hull wrote two letters to open up negotiations for the surrender. These can be found here and here.  After the surrender, Hull will say, "I have done what my conscience directed. I have saved Detroit and the Territory from the horrors of an Indian massacre." Brock's Proclamation and letter to Prevost of August 16 1812 are reproduced below. Robert Lucas's entry for the day, also reproduced below, gives a vivid sense of betrayal felt by many on the American soldiers.


WHEREAS the Territory of Michigan was this day by Capitulation ceded to the Arms of His Britannic Majesty without any other condition than the protection of private property — And wishing to give an early proof of the moderation and justice of the Government, I do hereby announce to all the Inhabitants of the said Territory, that the Laws heretofore in existence shall continue in force until His Majesty's pleasure be known, or so long as the peace and safety of the said Territory will admit thereof — And I do bereby also declare and make known to the said Inhabitants, that they shall be protected in the full exercise and enjoyment of their Religion, Of which all persons both Civil and Military will take notice, and govern themselves accordingly.


All persons having in their possession, or having any knowledge of any Public Property, shall forthwith deliver in the same or give notice thereof to the Officer Commanding, or Lieutenant Colonel Nichol, who are hereby duly Authorized to receive and give proper Receipts for the same.

Officers of Militia will be held responsible that all Arms in possession of Militia Men, be immediately delivered up,  and all Individuals whatever, who have in their possession, Arms of any kind, will deliver them up without delay.

Given under my hand, at Detroit, this sixteenth day of August, One thousand eight hundred and twelve, and in the Fifty Second Year of His Majesty's reign.

Sir - I hasten to apprize Your Excellency of the Capture of this very important Post: 2,500 troops have this day surrendered Prisoners of War, and about 25 Pieces of Ordnance have been taken, without the Sacrifice of a drop of British blood ; I had not more than 700 troops including Militia, and about 400 Indians to accomplish this Service. When I detail my good fortune Your Excellency will be astonished. I have been admirably supported by Colonel Procter, the whole of my Staff and I may justly say every individual under my command.