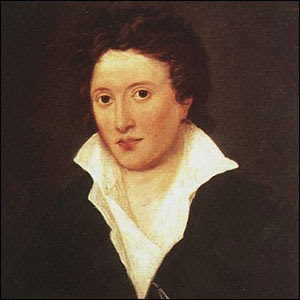 On  August 18, 1812, Percy Bysshe Shelley writes to Thomas Hookham enclosing a number of works that he hopes will be published. He sends the political pamphlet Letter to Lord Ellenborough and the poem Queen Mab: A Philosophical Poem. The latter would be published in 1813. The poem is a dense work that deals with such issues as atheism, love and the perfectibility of man. Shelley dedicates the poem to Harriett and writes some very beautiful lines in the dedication to her. The dedication reads:

Whose is the love that, gleaming through the world,
Wards off the poisonous arrow of its scorn?
Whose is the warm and partial praise,
Virtue’s most sweet reward?

Beneath whose looks did my reviving soul
Riper in truth and virtuous daring grow?
Whose eyes have I gazed fondly on,
And loved mankind the more?

Harriet! on thine: – thou wert my purer mind;
Thou wert the inspiration of my song;
Thine are these early wilding flowers,
Though garlanded by me.

Then press into thy breast this pledge of love;
And know, though time may change and years may roll,
Each floweret gathered in my heart
It consecrates to thine.

Shelley's letter is reproduced below and the poem Queen Mab can be found  here.
Dear Sir, Lymouth, Barnstaple
Aug. 18th 1812.

Your parcel arrived last night, for which I am much obliged. Before I advert to any other topic, I will explain the contents of mine in which this is enclosed. In the first place, I send you fifty copies of the Letter [to Lord Ellenborough].

I send you a copy of a work which I have procured from America, and which I am exceedingly anxious should be published. It develops, as you will perceive by the most superficial reading, the actual state of republicanized Ireland, and appears to me, above all things, calculated to remove the prejudices which have too long been cherished of that oppressed country. I enclose also two pamphlets which I printed and distributed whilst in Ireland some months ago (no bookseller daring to publish them). They were on that account attended with only partial success, and I request your opinion as to the probable result of publishing them with the annexed suggestions in one pamphlet, with an explanatory preface, in London. They would find their way to Dublin.

You confer on me an obligation, and involve a high compliment, by your advice. I shall, if possible, prepare a volume of essays, moral and religious, by November; but, all my MSS. now being in Dublin, and from peculiar circumstances not immediately obtainable, I do not know whether I can. I enclose also, by way of specimen, all that I have written of a little poem begun since my arrival in England. I conceive I have matter enough for six more cantos, you will perceive that I have not attempted to temper my constitutional enthusiasm in that poem. Indeed, a poem is safe : the iron-souled Attorney-General would scarcely dare to attack [it]. The Past, the Present, and the Future, are the grand and comprehensive topics of this poem. I have not yet half exhausted the second of them.

I shall take the liberty of retaining the two poems which you have sent me (Mr. Peacock's), and only regret that my powers are so circumscribed as to prevent me from becoming extensively useful to your friend. The poems abound with a genius, an information, the power and extent of which I admire, in proportion as I lament the object of their application. Mr. Peacock conceives that commerce is prosperity; that the glory of the British flag is the happiness of the British people ; that George III., so far from having been a warrior and a tyrant, has been a patriot. To me it appears otherwise; and I have rigidly accustomed myself not to be seduced by the loveliest eloquence or the sweetest strains to regard with intellectual toleration that which ought not to be tolerated by those who love liberty, truth, and virtue. I mean not to say that Mr. Peacock does not love them ; but I mean to say that he regards those means [as] instrumental to their progress, which I regard [as] instrumental to their destruction. At the same time, I am free to say that the poem appears to be far beyond mediocrity in genius and versification, and the conclusion of Talmyra the finest piece of poetry I ever read. I have not had time to read the Philosophy of Melancholy and of course am only half acquainted with that genius and those powers whose application I should consider myself rash and impertinent in criticising, did I not conceive that frankness and justice demand it.

I should esteem it as a favour if you would present the enclosed letter to the Chevalier Lawrence. I have read his Empire of the Nairs; nay, have it. Perfectly and decidedly do I subscribe to the truth of the principles which it is designed to establish.

I hope you will excuse, nay, and doubt not but you will, the frankness I have used. Characters of our liberality are so wondrous rare, that the sooner they know each other, and the fuller and more complete that knowledge is, the better.

Dear Sir, permit me to remain

I am about translating an old French work, professedly by M. Mirabaud — not the famous one — La Systeme de la Nature. Do you know anything of it ?
Posted by FAASouza