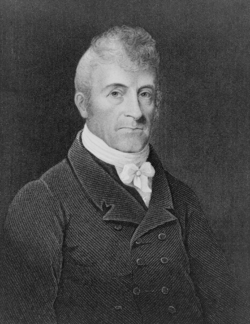 On August 31, 1812, General Van Rensselaer is writing to Governor Tompkins of New York. Van Rensselaer is the commanding officer at Lewiston in the Niagara Region. He is also one of the richest men in the state of New York, a Federalist and not very enthusiastic about Mr. Madison's War. Alan Taylor describes him in Civil War of 1812: American Citizens, British Subjects, Irish Rebels, & Indian Allies ( Alfred A. Knopf, New York, 2010) this way:


As a Federalist, Stephen Van Rensselaer was the prime exception to the partisan rule in awarding military commands. Owning thousands of acres worked by hundreds of tenant farmers, Van Rensselaer was the wealthiest landlord in New York. Educated at Yale, he possessed gracious manners and a popularity derived from his “condescension” to common men, including a reluctance to press his tenants to pay their rent. In 1812 he was preparing to run for governor against the Republican incumbent, Daniel D. Tompkins. In a political game of chicken, Tompkins got the Madison administration to appoint Van Rensselaer to the command on the Niagara front. Tompkins calculated that Van Rensselaer would, by declining, sacrifice his reputation for patriotism or, by accepting, have to mute his opposition to the war. Although a major general in the state militia, Van Rensselaer had never seen combat. Probably to Tompkins’s surprise, Van Rensselaer accepted...Despite their new positions, the Federalists continued to mock the war as a Republican folly.

Sir, Presuming that the surrender of General Hull's army has been officially announced to your Excellency through the proper channel, I shall not enter into my details upon the event so disastrous to our country: its consequence must be felt every where; but they are peculiarly distressing upon these frontiers, both to the citizens, and the little army under my command. Alarm pervades the country, and distrust among the troops. They are incessantly pressing for furloughs, under every possible pretence. Many are without shoes; all clamorous for pay. Many are sick. Swift's regiment at Black Rock are about one-fourth part down. I have ordered Doctor Brown to associate Doctor Chapin with him, and to examine as to the causes producing the diseases, the mode of treating them, &c., and to report to me their opinion of the best mode of restoring the sick, and preserving the health of those who remain well. This duty they are now performing.

Captain Jennings has been tried by a court-martial, and found guilty of such charges as forfeited his commission; and I have approved the sentence. The proceedings, in form, will soon be forwarded to your Excellency.

While we are thus growing daily weaker, our enemy is growing stronger. They hold a very commanding position on the high ground above Queenstown, and they are daily strengthening themselves in it, with men and ordnance. Indeed, they are fortifying almost every prominent point, from Fort Erie, to Fort George. At present we rest upon the armistice; but should hostilities be recommenced, I must immediately change my position. I receive no reinforcements of men, no ordnance, or munitions of war. I must hope, that I shall not long be left in this situation.

Two gentlemen, Messrs. Johnson and Bascom, came over in a flag to the garrison, at Niagara, and the first I knew of them they were in my camp. Being satisfied that they were American citizens, men of intelligence, and some standing in society, I permitted them to pass on, with orders to report themselves to your Excellency.

There is one fact, which though not immediately connected with my department, I cannot refrain from mentioning; the unfortunate soldiers of General Hull's army, who marched by my camp on their way to Lower Canada, are very destitute of clothing. Every consideration would urge that some attention should be paid to their condition.