On March 21, 1812, Augustus Foster, the British Minister in America, advises that the British will not be repealing the Orders in Council. War is now almost certain. The effect of Foster's information is described by Henry Adams [1] in his inimitable style as follows:

"Matters stood thus till March 21, 1812, when Washington was excited by news that Foster had received recent instructions from his Government, and the crisis of war an peace was at hand. "The anxiety and curiosity of both Houses of Congress," reported Foster, April 1, "to know the real nature of the despatches was so great that some of the members on committees told me they could not get the common routine of business at all attended to. The Department of State was crowded with individuals endeavouring to obtain information from Mr. Monroe, while I was questioned by all those with whom I happened to be acquainted." A report spread through Washington that the Orders in Council were repealed, and an immediate accommodation of all differences between England and the United States might be expected.

Foster would have been glad to find his new instructions composed in such a sense; but he hardly expected to find them so positive as they were in an opposite spirit....This usual formal by which diplomacy,  was reinforced by secret instructions warning Foster cautiously to "avoid employing any suggestions of compromise to the American government which might induce them to doubt the sincerity or firmness of his Majesty's government in their determination, already announced, of maintaining steadfastly the system of defence adopted by them until the enemy  shall relinquish his unwarrantable mode of attack upon our interests though the violation of neutral rights.

Foster regard this order as a rebuke, for he had talked freely, both to his own Government and in Washington, of the possibility that the Orders in Council might be withdrawn. The warning gave him a manner more formal than usual when he went, March 21, to assure Monroe that the Price Regent would never give way. Monroe listened with great attention; "then merely said, with however considerable mildness of tone, that he had hoped his conversations with me at the early part of the session would have produced a different result."  Foster left him without further discussion, and announced everywhere in public that, "far from being awed and alarmed at the threatening attitude and language" of Congress, his Government would maintain its system unimpaired." 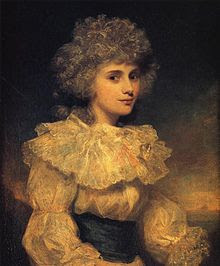 Elizabeth's letter of March to her son concerns the events in London, including the latest literary sensation Lord Byron. Augustus will also have  connection to Byron. Before leaving for America, he unsuccessfully had courted Anne Isabella Milbanke, who is to become Byron's wife. Byron is to meet Anne Isabel Milbanke for the first time on March 25, 1812 at a party given by Lady Caroline Lamb.


The letter of Elizabeth, Duchess of Devonshire is reproduced below.

. . . I always say that you don't tell me what is going on, but I make it a rule not to ask you. I am most anxious for it if it is possible without a sacrifice of national honor. It does seem as if it were more for the interest of America to be friends with us, who are masters of the sea, than with France, who has no fleet. Sweden seems determined to be independent. It is said Russia is going to war, and Armfeldt to have a command, but Bonaparte means, they say, to command in person, and if so, the odds are in his favor. Meanwhile dear Spain maintains the conflict, and perhaps may profit of the war between Russia and France.

The subject of conversation, of curiosity, of enthusiasm almost, one might say, of the moment is not Spain or Portugal, Warriors or Patriots, but Lord Byron! You probably read the Edinburgh Review's criticism of his "Minor Poems", published in 1808, not merely severe, but flippant. They prophesied and entreated never to hear more as a Poet of this young Lord. On this, stung to the quick, he published, without a name, his " English Bards and Scotch Reviewers ". The prodigious success of this made him publish a second edition with his name and additional lines and notes, and, going abroad, said that on his return he would answer to any who called on him. He returned sorry for the severity of some of his lines, and with a new poem, " Childe Harold", which he published. This poem is on every table, and himself courted, visited, flattered, and praised whenever he appears. He has a pale, sickly, but handsome countenance, a bad figure, animated and amusing conversation, and, in short, he is really the only topic almost of every conversation — the men jealous of him, the women of each other. I have my accounts from Caroline, Caro  William, and Lady Bessborough — all agree in their accounts. The misery is that his severest lines were on Lord Carlisle, and therefore Lord Morpeth has not yet and can't bear to meet him. But Lord Byron has bought up all the third edition, which is a great sacrifice to have made, and ought to conciliate everybody. . . .