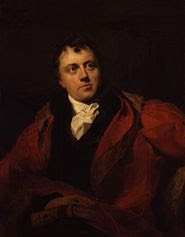 On March 31, 1812, Sir James Mackintosh, former Chief Justice of Bombay, is aboard a ship returning to England having left India around November 5, 1811. He will reach England on April 25, 1812, 172 days after he left Bombay. Mackintosh was a Scottish jurist, politician and historian. He had been in India since 1804. While on board he passed the time by reading and recording his impressions in his journal. The journal was also being kept for the benefit of his wife Lady Mackintosh's. Ill health had forced her to return to England sooner than her husband. They have been separated for two years. Extracts from the journal are reproduced below:


[March 1812] 31st. — In the American papers I see advertised the sixth American edition of 'Paley's Philosophy.' — No bad sign of American intellect.

I find 'Hudibras' heavy — loaded with pedantic learning and temporary allusion; but probably the languor of my present state infects my taste. I have finished the first volume of Macpherson's 'Annals of Commerce,' — a laborious compilation, seemingly ample with respect to England, and scanty about other countries, with no elegance, not much order, nor illuminated by general principles.


Twice on deck to-day without much fatigue. We are now only 1440 miles south of England!


April 2nd. — I have read, with great and increasing pleasure, thirteen cantos of the 'Faerie Queene,' and I have written the first stanza of my verses — I fear, with more truth than poetry. I can truly say, that no other subject in the world could have roused my languor to the composition of fourteen verses — Shall I see you on Thursday the 23rd, which is this day three weeks? Oh, how I long for a sight of you!


3rd. — Finished fifty-six verses, to my great astonishment. Spenser justly felt the superiority of his own art.

Ne poet's witte that passeth painter faire,
In picturing the parts of beauty daynte,
So hard a workmanship adventure dare.

All Spenser's beauties have yellow haire. Was this the taste of the age, or a compliment to Elizabeth?


'Through thick and thin' — 'By hook and crook' — 'With might and main,' — were, in the time of Spenser, phrases admissible in poetry; if any writer, when English becomes a dead language, should mix these phrases with the style of Gray, he would make a jumble probably resembling our best Latinity.

4th. — Reading Spenser with singular delight. I need not say that the allegory is to be forgotten, and I must admit that the love affairs and combats are almost as uniform as Homer's battles — in this respect it resembles all other romances of Chivalry; but the tale is told in such sweetly-flowing verse, and adorned by such enchanting pictures, with a style which so perfectly unites simplicty and elegance, that whoever conquers the first difficulty must (as I think) have an unpoetical soul, if he afterwards refrain from proceeding. There is not poet in whom you may so often trace Milton.


5th, Sunday. — I have written you another set of verses, consisting of twenty lines, all written since breakfast, though I have jammed my fingers behind the door.

6th. — In sight of St. Mary's, the most easterly of the Azores, about five leagues distant, and of a strange sail, of which no particulars are yet ascertained.


I see many individual and historical strokes in Spenser's Allegory; I must read Warton and Todd to understand it thoroughly: the just execution of a beautiful woman, Munera, by Sir Artegal, was certainly intended to reconcile the mind to the execution at Fotheringay.


Higher waves than we have seen since quitting the neighbourhood of the Cape, show the vigilance with which the Empress of the Sea guards the approaches to her palace; these are the seas which form the skill and boldness of English seamen.


I have finished the 'Faerie Queene.' I never parted from a long poem with so much regret. He is a poet of a most musical ear — of a tender heart — of a peculiarly soft, rich, fertile, and flowery fancy. His verse always flows, with ease and nature, most abundantly and sweetly; his diffusion is not only pardonable, but agreeable. Grandeur and energy are not his characteristic qualities. He seems to me a most genuine poet, and to be justly placed after Shakspeare and Milton, and above all other English poets. Spenser and Cervantes, within a few years of each other, wrote great works, founded on the system of expiring chivalry. Spenser has treated it like a poet, and Cervantes like a wit; but those who can laugh at wit are far more numerous than those who can feel poetry; and hence, without derogating from the transcendent genius of Cervantes, must, in a great measure, be explained the superior popularity of 'Don Quixote.'
Sir Philip Sidney, Sir Walter Raleigh, Bacon, Shakspeare, and Spenser! What a glorious reign!

10th. — This, as I belive I said last year, is the only holiday in my slender calendar; this year I solemnise it heartily, but I cannot celebrate it gaily.

11th. — Breakfast swinging in my cot. We are less than three hundred miles from the 'Lizard.'


—Read the first, and half the second, volume, quarto, of Dr. Ferguson's 'Principles of Moral and Political Philosophy.' He was Dugald Stewart's predecessor, and, as I attended his lectures, I heard the substance of his book.


He has, in some degree, the Scotch fault of expressing common ideas in a technical form. He has adapted the very just, stoical principal, 'that the state of the mind is of more importance to happiness than outward circumstances;' but he is so entirely and constantly occupied with it, as to forget every thing else. There is something not unbecoming a moral teacher in his austere, dogmatic, sententious manner; and he contemplates human life with a cold sterness worthy of those magnanimous moralists whom he professes to follow. I entirely agree with him in rejecting rewards and punishments as motives to virtue. I was rather surprised to find, at the end of his first volume, some observations respecting a future state, bearing some similarity to those which are made in my journal of last August; I am also surprised at finding such grand and, as I think, just notions of the progressive character of the human species. It is not a pleasing, but it is an improving book; it elevates the moral sentiments.


The Bay of Biscay is now under our lee, and the swell towards it very considerable.

12th, Sunday. — Better this morning; but, after a calm, the wind has been too far eastward, and driving us towards Ireland. — Got into our course again about eleven. — Finished Ferguson. The part of the second volume which details the moral duties, is far superior to the rest of the work, and is, indeed, of such excellence, that I must read it again, — particularly if I write a treatise on morals, or a book of synomyms. His distinctions are in general very good; I except that between civility and politeness, of which he makes the first negative, and the second positive, and I think him wrong in both. His idea of liberty is the same which I gave in my 'Discourse on the Law of Nature,' that it was, 'security against wrong;' I was not aware that I had been in substance anticipated. He does not apply his general principle to the distinction between civil and political liberty, of which the former is security against wrong from our fellows, and the latter is security against wrong from our governors. — Wind again runs up in the wrong direction!


—Read, for the first time, the minor poems of Shakspeare; they are most musical, and, with Spenser, Fairfax, Daniel, and Drayton, serve to show that English poetry was most harmonious at the close of Elizabeth's reign. 'Waller was smooth,' is false in the sense in which it was intended, that he first was smooth.


I was struck with the resemblance of the following couplet in one of the sonnets, to one in some lines you have read: —

Thou art thy mother's glass, and she in thee
Calls back the lovely April of her prime.


Read (for the first time) Spenser's 'Pastorals,' 'Hymns,' and 'Mother Hubbard's Tale.' Every thing in nature that smiles, — cheerfulness, or beauty, or tenderness, — is in the province of his genius; he does not, with Shakspeare,


He might vie with Milton himself in the picture of Paradise; but he could not ascend with him into Heaven — much less follow him to the terrific sublimity of Hell. Grandeur frowns too frequently to be a favourite object of his gentle fancy.
In the 'Hymns of Love and Beauty,' I find some ideas anticipated, contained in the said verses you know of. He accents 'mischief,' mischievous,' on the second syllable, as we do in Scotland. 'Gars me greet,' is a half verse of pure Scotch, as it is spoken at this day.
In 'Mother Hubbard's Tale' are four lines, which might have been applied to the conditions under which Mr. Pitt offered, and Mr. Perceval granted, the regency to the Prince: —

And I reason meet will rest content
That ye shall have both crown and government,
Upon condition that ye ruled be
In all affairs, and counselled by me.

16th. — Another miserable day of obstinate easterly wind. Cold, motion, delay, disappointment, impatience — unable to walk, or even to stand — every physical and moral evil. Spenser's minor poems steal a few minutes from pain. Do you think that even a Chinese could paint the gay colours of a butterfly with more minute exactness than the following lines?

The velvet nap which on his wings doth lie;
The silken down with which his back is dight;
His broad, outstretched horns, his hairy thighs,
His glorious colours, and his glistering eyes.

By-the-by, do you remember the poor Madagascar butterfly that visited us in the 'Winchelsea?' he was the only native of Madacascar whom I have ever seen.


I have acquired two charming friends on this voyage, Spenser and Madame de Sevigne, and one most respectable acquaintance, Sir William Temple....