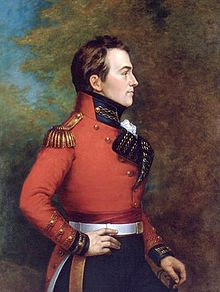 On March 23, 1812 Sir Isaac Brock of Upper Canada writes to Lord Liverpool concerning the recent session of the legislature of Upper Canada [1]. Lord Liverpool is the Secretary of State for War and the Colonies in Spencer Perceval's Tory government. He will succeed Perceval as Prime Minister when he is assassinated in May 1812. Brock is still smarting from the legislature's refusal to suspend the Habeas Corpus and take other steps that he thinks necessary to deal with the coming war.  Brock writes: —

"My observations convinced me of the expediency of every militiaman taking an oath abjuring every foreign power. The many settlers from the United States who openly profess a determination of not acting against their countrymen, made some test highly necessary. The number of aliens emigrating from the United States, who have acquired property and consequently votes for the Assembly, alarmed at the novelty of an oath of abjuration, exerted their utmost efforts and ultimately succeeded (so extensive is the influence of these people that it even masters the Legislature), in preventing by the casting vote of the chairman, the adoption of this. A bill for the suspension of the Habeas Corpus was also defeated by their influence. Liable to the constant inroads of the most abandoned characters who seek impunity in this province from crimes of high enormity committed in the States and surrounded by a population, a great part of which profess strong American feelings and attachments, it will not, I hope, be deemed unreasonable at a time like the present, if I should be desirous to be clothed, in conjunction with His Majesty's Executive Council, with the means so well calculated to maintain public tranquillity."