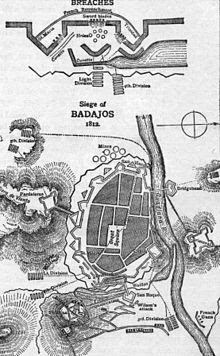 On March 28, 1812, Lieutenant John J. Connell, Royal Artillery, was killed in the trenches at Badajoz, Spain.  There were many more casualties. The British and Portuguese armies had been besieging the town since March 16, 1812. This involved the dangerous work of digging trenches,  parallels and earthworks to protect the heavy siege artillery needed to breach the fortress walls. The soldiers digging the trenches were exposed and were fired upon by the French troops in the fortress. Captain John Kincaid noted wryly "One day's trench-work is as like another as the days themselves and like nothing better than serving an apprenticeship to the double calling of grave-digger and game-keeper, for we found ample employment both for the spade and the rifle." Kinkaid also wrote that given the scale of the operations at Badajoz each man was required to be "in the trenches six hours every day and the same length every night".


Kinkaid gives this account of the siege prior to the final assault on April 6th:

The only varieties during the siege were,— First the storming of Picuvina, a formidable outwork occupying the centre of our operations. It was carried one evening in the most gallant style by Major-General Sir James Kempt at the head of the covering parties. Secondly a sortie made by the garrison, which they got the worst of, although they succeeded in stealing some of our pickaxes and shovels. Thirdly a circumbendibus* described by a few daring French dragoons who succeeded in getting into the rear of our engineers' camp, at that time unguarded, and lightened some of the officers of their epaulettes. Lastly two field-pieces taken by the enemy to the opposite side of the river, enfilading one of our parallels and materially disturbing the harmony within, as a cannon-shot is no very welcome guest among gentlemen who happen to be lodged in a straight ditch, without the power of cutting it.

Our batteries were supplied with ammunition by the Portuguese militia from Elvas, a string of whom used to arrive every day, reaching nearly from the one place to the other (twelve miles), each man carrying a twenty-four pound shot and cursing all the way and back again.

The Portuguese artillery, under British officers, was uncommonly good. I used to be much amused in looking at a twelve-gun breaching-battery of theirs.

They knew the position of all the enemy's guns which could bear upon them, and had one man posted to watch them, to give notice of what was coming, whether a shot or a shell, who, accordingly, kept calling out, "bomba, balla, balla, bomba," and they ducked their heads until the missile past: but sometimes he would see a general discharge from all arms, when he threw himself down, screaming out "Jesus, todos, todos!" meaning "everything."     An officer of ours was sent one morning before daylight, with ten men, to dig holes for themselves opposite to one of the enemy's guns which had been doing a great deal of mischief the day before, and he had soon the satisfaction of knowing the effect of his practice by seeing them stopping up the embrasure with sandbags. After waiting a little he saw them beginning to remove the bags, when he made his men open upon it again, and they were instantly replaced without the guns being fired; presently he saw the huge cocked hat of a French officer make its appearance on the rampart, near to the embrasure; but knowing, by experience, that the head was somewhere in the neighbourhood, he watched until the flash of a musket, through the long grass, showed the position of the owner, and, calling one of his best shots, he desired him to take deliberate aim at the spot and lent his shoulder as a rest, to give it more elevation. Bang went the shot, and it was the finishing flash for the Frenchman, for they saw no more of him, although his cocked hat maintained its post until dark.

In proportion as the grand crisis approached, the anxiety of the soldiers increased not on account of any doubt or dread as to the result, but for fear that the place should be surrendered without standing an assault; for, singular as it may appear, although there was a certainty of about one man out of every three being knocked down, there were, perhaps, not three men in the three divisions who would not rather have braved all the chances than receive it tamely from the hands of the enemy. So great was the rage for passports into eternity in our battalion on that occasion that even the officers' servants insisted on taking their places in the ranks and I was obliged to leave my baggage in charge of a man who had been wounded some days before. 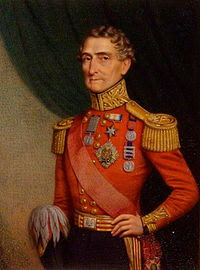 Sir Henry George Wakelyn Smith summed up the siege pithily by writing [2] "Our duties in the trenches were most laborious during the whole siege, and much hard fighting we had, sorties, etc." In his book, prior the final assault, he is more interest in discussing hare hunting and his "stupid horse" that fell on him on one hunt. He writes:

"After some hours in the trenches, when we returned I invariably ate and went out coursing, and many is the gallant course I had, and many the swift hare I and my dog Moro brought home from the right bank of the Guadiana. One day James Stewart, I, and Charlie Eeles set off; having three hours off duty, to look for a hare or two at a celebrated spot where the hares ran very strong because there was a rabbit warren which saved them. Moro, of course, was of the party. We soon found an unusually strong hare, and, although the greyhounds fetched round a dozen times, she still worked her way for the warren. I was riding a great stupid Irish horse bought from General Vandeleur, called Paddy, and as it was important for the soup to kill this hare, however unsportsmanlike on quiet occasions it would be deemed, I rode to head her from the warren. My stupid beast of a horse put his foot into a hole and rolled over me. Stewart and Eeles picked me up, but I was insensible. Although I have generally managed on such occasions to get away from the horse, the animal had rolled over me, and when I came to myself I was sitting on Eeles' knee, my arms tied up with a whip-thong, and James Stewart, with a blunt-looking penknife, trying to bleed me, an operation I quickly prohibited by starting on to my legs. Moro killed his hare, though, without my help."

1.    Adventures in the Rifle Brigade by Captain John Kincaid. (Leo Cooper, London, 1997) from the electronic version that can be found here.
2.    The autobiography of Lieutenant-General Sir Harry Smith, baronet of Aliwal on the Sutlej, G.C.B. by Sir Henry (Harry) George Wakelyn Smith (1788-1860). Ed. with the addition of some supplementary chapters by George Charles Moore Smith (1858-1940). London: J. Murray, 1903)at chapter VIII