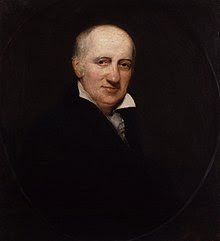 On March 30, 1812, William Godwin is again writing to Percy Bysshe Shelley in Dublin. Earlier, on March 14 he had urged Shelley to return to London. Godwin again tries to counsel Shelley not to be disheartened by the slow pace of change in society. Godwin the old radical writes as  follows:

I received your last letter on the 24th inst., and the perusal of it gave me a high degree of pleasure. . . . I can now look upon you as a friend. Before, I knew not what might happen. It was like making an acquaintance with Robert Emmet, who, I believe, like yourself, was a man of a very pure mind, but respecting whom I could not have told from day to day what calamities he might bring upon his country; how effectually (like the bear in the fable) he might smash the nose of his mother to pieces, when he intended only to remove the noxious insect that tormented her; and what premature and tragical fate he might bring upon himself. Now, I can look on you, not as a meteoric ephemeral, but as a lasting friend, who, according to the course of nature, may contribute to the comforts of my closing days. Now, I can look on you as a friend like myself, but I hope more effectually and actively useful, who is prone to study the good of his fellow men, but with no propensities threatening to do them extensive mischief, under the form and intention of benefit. . . .

You say, ‘I will look to events in which it will be impossible I can share, and make myself the cause of an effect which will take place ages after I shall have mouldered into dust.’ In saying this you run from one extreme to another. I have often had occasion to apply a principle on the subject of education, which is equally applicable here—‘Be not easily discouraged; sow the seed, and after a season, and when you least look for it, it will germinate and produce a crop.’ I have again and again been hopeless concerning the children with whom I have voluntarily, or by the laws of society, been concerned. Seeds of intellect and knowledge, seeds of moral judgment and conduct, I have sown; but the soil for a long while seemed ungrateful to the tiller’s care. It was not so; the happiest operations were going on quietly and unobserved, and at the moment when it was of the most importance, they unfolded themselves to the delight of every beholder.


These instances of surprise are owing solely to the bluntness of our senses. You find little difference between the men of these islands of Europe now and twenty years ago. If you looked more into these things you would perceive that the alteration is immense. The human race has made larger strides to escape from a state of childhood in these twenty years than perhaps in any hundred years preceding. . . .