On July 16 1812, Russia's First Army of the West completes its evacuation of Drissa led by Barclay de Tolly. Tsar Alexander accompanies the army as far as Polotsk. Alexander has decided, at the urging of his generals, that his place is not with the armies but in Moscow to rally the Russian people. The historian, Adam Zamoyski [1], writes: 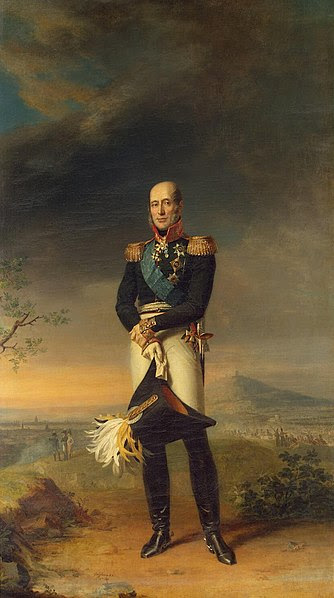 A couple of hours later he [Tsar Alexander] mounted his horse and rode out to see Barclay, whom he found having a frugal supper in a stable. They spent an hour together, and when they emerged from the stable Alexander embraced Barclay, saying, "Farewell, General, once more farewell, au revoir. I commend my army to your keeping. Do not forget that it is the only one I have." He mounted his horse and rode back to Polotsk, where he have orders for his departure for Moscow the next day.

On the same day, Napoleon finally decides to leave Vilna or Vilnius to take personal charge of the hunt for the Russian Armies.

Also, on that day, a soldier by the name of Kunkel [2], from Marburg, Kingdom of Westphalia, serving in the Grande Army, writes home:

... Here there is a lack of all foodstuffs. The bread that is delivered is so bad that one can’t eat it, yet very dear to buy, one bread is paid eight pennies, it is baked from chaff and at that it is not baked through, it lies like lead on the stomach. Hunger drives it down though. Meat is also very bad, half smelly, and yet it has to be eaten. What else can one eat? Our march from Warsaw was good and bad, we quartered under the free sky, God was our host. Thunderstorm rains have at times drenched us thoroughly. For four days I did not have a single dry thread on me and then nothing in the belly but a gulp of wutki [vodka] and a piece of dark bread...

Our good life has ended since we left Warsaw. Now one has to learn to suffer hunger and thirst. Our faces look different. Brown in the face like a chestnut and a mustache under my nose have completely disfigured me. Thank God that I am in health, I bite at times in the old army bread, so that it rattles, and drives the hunger away.