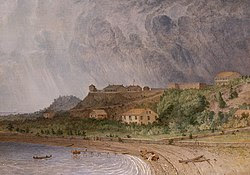 On July 17 1812, a combined British, Canadian and Native force of seventy war canoes and ten bateaux under the command of Captain Charles Roberts attack Fort Mackinac. Roberts' force has come from Fort St. Joseph landing on the north end of Mackinac Island. His men march two miles to the fort. The town's inhabitants are taken from their homes for their protection. Two cannons are positioned to target the fort. Americans, under Lieutenant Hanks, unaware that war has been declared, are taken by surprise. Hanks surrenders and signed Articles of Capitulation reproduced below. Captain Roberts then writes to Colonel Baynes and Brigadier General Brock. The letters are reproduced below.

CAPITULATION agreed upon between Captain Charles Roberts, commanding his Britannic Majesty's forces, on the one part, and Lieutenant Porter Hanks, commanding the forces of the United States, on the other.

I.   The Port of Michilimackinae shall immediately be surrendered to the British forces. Granted.

II.   The garrison shall march out with the honours of war, lay down their arms, and become prisoners of war, and shall be sent to the United States of America by his Britannic Majesty, Not to serve in this war until regularly exchanged; and for the due performance of this article the officers pledge their word of honour. Granted.

III.  All the Merchant Vessels in the harbour, with their cargoes, shall be in the possession of their respective owners. Granted.

IV. Private property shall he held Sacred as far as it is in my power. Granted.


V.  All citizens of the United States of America who shall not take the oath of allegiance to his Britannic Majesty, shall depart with their property from the island in one month from the date hereof. Granted.

Sir, On the 15th instant I received Letters by Express from Major General Brock-with orders to adopt the most prudent measures either of offence or defence which circumstances might point out, and having received intelligence from the best information that large reinforcements were daily expected to be thrown into this Garrison, and finding that the Indians who had been collected would soon have abandoned me if I had not made the attempt, with the thorough conviction that my situation at St. Josephs was totally indefensible, I determined to lose no time in making the meditated attack on this Fort.

On the sixteenth at Ten oclock in the morning I embarked my few men with about one hundred and eighty Canadian Engagees half of them without Arms about three hundred Indians, and two Iron six pounders, the boats arrived without the smallest accident at the place of Rendezvous at three o'Clock the following morning — by the exertions of the Canadians one of the Guns was brought up to a height commanding the Garrison and ready to act about Ten O'clock, a summons was then sent in a Copy of which as well as of the Capitulation which followed, I have the Honor to enclose at twelve the American Colours were hauled down and those of His Majesty's were hoisted — A Committee has been appointed to examine into the State of the Public Stores. Inclosed also are Returns of the Ordnance and Military Stores found in the Fort, and the Strength of the Garrison. The greatest praize is due to every Individual employed in this Expedition to my own Officers I am indebted in particular for their active assistance in carrying all my orders into effect.

The Indians are flocking in from all quarters but in a few weeks I shall be left in a great measure to my own resources, and I trust His Excellency the Governor General will see the necessity of adding to my force,


I have the Honor to be Sir, Your most Obedient Servt,
Charles Roberts, Captain Commanding

I had the honor to receive Your letter dated the 4th of July, on the 15th inst. and foreseeing that I should soon be abandoned by the Indians whose minds had been prepared for hostilities, if I did not immediately employ them, and also that the moment so favorable for making an attack upon this place so highly important at the present Crisis might soon be lost, — I embarked on the morning of the 16th with Two of the Six pounders and every Man I could muster, and at Ten o'-clock the Signal being made we were immediately under weigh.

By the almost unparalleled exertions of the Canadians who manned the Boats, we arrived at the place of Rendezvous at 3 oclock the following morning.

One of these unwieldly Guns was brought up with much  difficulty to the Heights above the Fort and in readiness to open about Ten oclock at which time a Summons was sent in and the Capitulation, a Copy of which I have the honor to enclose, was soon after agreed upon. — I took immediate possession of the Fort, and displayed the British Colours. — It is a circumstance I believe without precedent, and demands the greatest praise for all those who conducted the Indians, that although these people's minds wore much heated, yet as soon as they heard the Capitulation was signed they all returned to their Canoes, and not one drop either of Man's or Animal's Blood was Spilt, till I gave an Order for a certain number of Bullocks to be purchased for them — I have not yet been able to obtain returns of the Stores here — they shall be forwarded  by the earliest opportunity —

I cannot conclude this Letter without expressing my warmest thanks to my own Officers — to the Gentlemen of St Joseph's and St Mary's, and to every individual engaged in this
Service.

I trust, Sir, in thus acting I have not exceeded Your Instructions, for be assured that prudential measures of the first neccesity demanded the Step which has put me in possession of this Island.