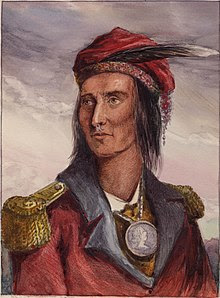 On July 25 1812, the Americans suffer the first casualties on the war. There had been periodic skirmishes on the border,  near the River Canard, since the invasion of Upper Canada by General Hull. According to Robert Lucas, the night before, Major Denny with a detachment of about 150 men had gone out ’for the purpose of Waylaying and Cutting of a Detachment of Indians that was reported to be ranging in the woods.’ The next day Major Denny was ambushed by native warriors near Turkey Creek Bridge. Lucas reports that six American soldiers were killed while others say four Americans were killed. One of the dead was Avery Powers who received several shots thought his body was tomohawked but not scalped. According to some the ambush of the American force had been organized by Tecumseh. The Americans fought back but eventually retreated back to Sandwich. Lucas reports that some native warriors were killed and one was scalped. Lucas writes: ’Capt McCollock this day killed and Scalped an Indian it being the only Scalp that was taken’. This appears to have been the first recorded scalping of the war. An excerpt from Robert Lucas`Journal is reproduced below describing the day in more detail.

[ Saturday, July the Twenty-fifth ] 25 This morning W m Stockton being onwell returned to the Camp, a Short time after Avery powers being like onwell left the detachment and returned as far as turk[e]y Creek when he was fired upon by a party of Indians and killed Several balls was Shot through his body he was tomahawk [e]d but not Scalped. The Indians it appears from information of the inhabitants was brought up to that place by a Certain french Capta[i]n Bonty, by water for the purpose of waylaying the detachment that was down with Major Denny.

Major Denny it appears made Considerable ranges through the Countary, fell in with Capt Bonty who pertended to be going to reap his harves[t], he was interrogated and found to be an officer in the British Servic[e] and was taken prisoner, — and Sent on to Camp under the Care of Ensign Baird and a small detachm[e]nt of men, — after the prisoner had been Sent the Detachment under the Command of Major Denny took a Circuitous rout[e], through the woods and being much fateeguied halted in a grove of woods to rest, the troops generally fell a Sleep, and was reposing in this position when a detachment of Indians was Seen near them, they arose and fired upon the Indians, killed Several and got the musket that was taken from Avery powers in the morning, the Indians was pursued until they was reinfor[ce]d part of the detach - m[e]nt under Maj[o]r Den[n]y retreated in Disorder without making any defence The Major found himself likely to be outflanked by the enemy ordered a retreat, they were pursued by the Indians and a party of British for Several miles, to turk[e]y creek Bridge. They lost Six men this day in all Killed and taken prisoners, — an express came into Camp with an acco[u]nt of the Death of Avery Pow- ers I immediately on hearing the news started with a part of Capt Robinsons Rifle Company to reinforce Major Denny and to bring in the Dead. I rushed on in hast[e], and met the Major at turk[e]y creek the plac[e] where Avery Pow- ers lay. I proposed going back to meet the Indians, but the men with Major Denny being much fateegued and Con- sider [in] g our fource not Sufficient the proposition was not agreed to we accordingly returned to Camp and took the body of Avery powers a very brave man with us. Capt McCollock this day killed and Scalped an Indian it being the only Scalp that was taken, altho[ugh] Several indians was Seen killed, Major Denny attaches great credit [to] the. detaehm[en]t under the Command of Capt Lucas and Lieut Mur[p]hy[?], and a part of Capt Rupes Company—