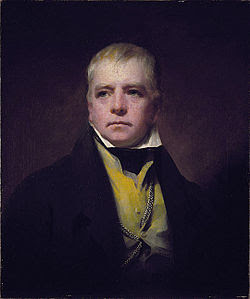 On July 3 1812, Walter Scott writes to Lord Byron as a result of the efforts of their joint publisher, John Murray, to reconcile them. In an earlier work, Byron had directed some satiric jibes at Scott. This is now being put behind them. Murray had conveyed to Scott a conversation that Byron had with the Prince Regent, where Scott was discussed in the most flattering terms. Scott now writes, in part, to praise Byron's Childe Harold even though his actual views are less flattering. On April 4 1812, Scott had this to say about Byron's poem:

Have you seen the Pilgrimage of Childe Harold, by Lord Byron? It is, I think, a very clever poem, but gives no good symptom of the writer's heart or morals. His hero, notwithstanding the affected antiquity of the style in some parts, is a modern man of fashion and fortune, worn out and satiated with the pursuits of dissipation, and although there is a caution against it in the preface, you cannot for your soul avoid concluding that the author, as he gives an account of his own travels, is also doing so in his own character.

Now really this is too bad; vice ought to be a little more modest, and it must require impudence at least equal to the noble Lord's other powers, to claim sympathy gravely for the ennui arising from his being tired of his wassailers and his paramours. There is a monstrous deal of conceit in it too, for it is informing the inferior part of the world that their little old fashioned scruples of limitation are not worthy of his regard, while his fortune and possessions are such as have put all sorts of gratification too much in his power to afford him any pleasure. Yet with all this conceit and assurance, there is much poetical merit in the book and I wish you would read it.

Scott's  letter  is reproduced below.

MY LORD, – I am uncertain if I ought to profit by the apology which is afforded me, by a very obliging communication from our acquaintance, John Murray of Fleet Street, to give your Lordship the present trouble. But my intrusion concerns a large debt of gratitude due to your Lordship, and a much less important one of explanation, which I think I  owe to myself, as I dislike standing low in the opinion of any person whose talents rank so highly in my own as your Lordship’s most deservedly do.

The first count, as our technical language expresses it, relates to the high pleasure I have received from the Pilgrimage of Childe Harold, and from its  precursors; the former, with all its classical associations, some of which are lost on so poor a scholar as I am, possesses the additional charm of vivid and animated description, mingled with original sentiment; – but besides this debt, which I owe your Lordship in common with the rest of the reading public, I have to acknowledge my particular thanks for your having distinguished by praise, in the work which your Lordship rather dedicated in general to satire, some of my own literary attempts. And this leads me to put your Lordship right in the circumstances respecting the sale of Marmion, which had reached you in a distorted and misrepresented form, and which, perhaps, I have some reason to complain, were given to the public without more particular inquiry.

The poem, my Lord, was not written upon contract for a sum of  money – though it is too true that it was sold and published in a very unfinished state (which I have since regretted) to enable me to extricate myself from some engagements which fell suddenly upon me by the unexpected misfortunes of a very near relation. So that, to quote statute and precedent, I really come under the case cited by Juvenal, though not quite in the extremity of the classic author –
Esurit, intactam Paridi nisi vendit Agaven. [if he does not sell his [virgin] Agave to Paris]

And so much for a mistake, into which your Lordship might easily fall, especially as I generally find it the easiest way of stopping sentimental compliments on the beauty, &c. of certain poetry, and the delights which the author must have taken in the composition, by assigning the readiest reason that will cut the discourse short, upon a subject where one must appear either conceited, or affectedly rude and cynical.

As for my attachment to literature, I sacrificed for the pleasure of pursuing it very fair chances of opulence and professional honours, at a time of life when I fully knew their value; and I am not ashamed to say, that in deriving advantages in compensation from the partial favour of the public, I have added some comforts and elegancies to a bare independence. I am sure your Lordship’s good sense will easily put this unimportant egotism to the right account, for – though I do not know the motive would make me enter into controversy with a fair or an unfair literary critic – I may be well excused for a wish to clear my personal character from any tinge of mercenary or sordid feeling in the eyes of a contemporary of genius. Your Lordship will likewise permit me to add, that you would have escaped the trouble of this explanation, had I not understood that the satire alluded to had been suppressed, not to be reprinted. For in removing a prejudice on your Lordship’s own mind, I had no intention of making any appeal by or through you to the public, since my own habits of life have rendered my defence as to avarice or rapacity rather too easy.

Leaving this foolish matter where it lies, I have to request your Lordship’s acceptance of my best thanks for the flattering communication which you took the trouble to make Mr. Murray on my behalf, and which could not fail to give me the gratification which I am sure you intended. I dare say our worthy bibliopolist overcoloured his report of your Lordship’s conversation with the Prince Regent, but I owe my thanks to him nevertheless for the excuse he has given me for intruding these pages on your Lordship. Wishing you health, spirit, and perseverance, to continue your pilgrimage through the interesting countries which you have still to pass  with Childe Harold, I have the honour to be, my Lord, your Lordship’s obedient servant,  WALTER SCOTT

P.S. – Will your Lordship permit me a verbal criticism on Childe Harold, were it only to show I have read his Pilgrimage with attention? “Nuestra Dama de la Pena” means, I suspect, not our Lady of Crime or Punishment, but our Lady of the Cliff; the difference, is, I believe, merely in the accentuation of “pena.”