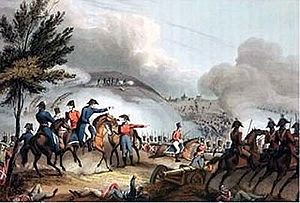 On July 22, 1812, the Anglo-Portuguese and Spanish armies under Wellington defeat Marshal Auguste Marmont's French forces on the hills around Arapiles south of Salamanca, Spain. Marmont and the Army of Portugal had been moving south. Marmont saw a dust cloud in the distance and thought that the allies were retreating and that he was facing only a rearguard. Marmont ordered his French army south, then west so he could turn the allies` right flank. This was a mistake. Wellington's army was in fact concealed under a ridge. Wellington ordered an attack when he saw that the French divisions marching along the British and Portuguese front were exposed on their flanks. Wellington was also aided by the fact that Marmont and his deputy commander General Bonet were wounded by shrapnel after the fighting began. The French left wing was routed and Wellington gained total victory on the battlefield. The British suffered losses of 3,129, 6 Spanish and 2,038 Portuguese dead. The French had 13,000. Wellington's victory allowed him to advance on Madrid, and the French had to abandon the Andalusia region. Sir John Kincaid [1] fought at Battle of Salamanca. He describes the battle as follows:


July 22d. — A sharp fire of musketry commenced at daylight in the morning; but, as it did not immediately concern us and was nothing unusual, we took no notice of it, but busied ourselves in getting our arms and our bodies disengaged from the rust and the wet engendered by the storm of the past night.

About ten o'clock our division was ordered to stand to their arms and then moved into position, with our left resting on the Tormes and our right extending along a ridge of rising ground, thinly interspersed with trees, beyond which the other divisions were formed in continuation, with the exception of the third which still remained on the opposite bank of the river.

The enemy were to be seen in motion on the opposite ridges, and a straggling fire of musketry, with an occasional gun, acted as a sort of prelude to the approaching conflict. We heard, about this time, that Marmont had just sent to his ci-devant landlord, in Salamanca, to desire that he would have the usual dinner ready for himself and staff at six o'clock; and so satisfied was "mine host" of the infallibility of the French Marshal that he absolutely set about making the necessary preparations.

There assuredly never was an army so anxious as ours was to be brought into action on this occasion. They were a magnificent body of well-tried soldiers, highly equipped and in the highest health and spirits, with the most devoted confidence in their leader and an invincible confidence in themselves. The retreat of the four preceding days had annoyed us beyond measure, for we believed that we were nearly equal to the enemy in point of numbers and the idea of our retiring before an equal number of any troops in the world was not to be endured with common patience.

We were kept the whole of the forenoon in the most torturing state of suspense through contradictory reports, one passing officer telling us that he had just heard the order given to attack, and the next asserting with equal confidence that he had just heard the order to retreat; and it was not until about two o'clock in the afternoon that affairs began to wear a more decided aspect and when our own eyes and ears at length conveyed the wished-for tidings that a battle was inevitable; for we saw the enemy beginning to close upon our right and the cannonade had become general along the whole line. Lord Wellington about the same time ordered the movement which decided the fate of the day—that of bringing the third division from beyond the river on our left rapidly to our extreme right, turning the enemy in their attempt to turn us and commencing the offensive with the whole of his right wing. The effect was instantaneous and decisive, for although some obstinate and desperate fighting took place in the centre, with various success, yet the victory was never for a moment in doubt and the enemy were soon in full retreat, leaving seven thousand prisoners, two eagles, and eleven pieces of artillery in our hands. Had we been favoured with two hours more daylight their loss would have been incalculable, for they committed a blunder at starting, which they never got time to retrieve and their retreat was therefore commenced in such disorder, and with a river in their rear, that nothing but darkness could have saved them.

THE third division, under Sir Edward Pakenham, the artillery and some regiments of dragoons particularly distinguished themselves. But our division, very much to our annoyance, came in for a very slender portion of this day's glory. We were exposed to a cannonade the whole of the afternoon; but, as we were not permitted to advance until very late, we had only an opportunity of throwing a few straggling shot at the fugitives before we lost sight of them in the dark and then bivouacked for the night near the village of Huerta (I think it was called).


1.    Adventures in the Rifle Brigade by Captain John Kincaid. (Leo Cooper, London, 1997) from the electronic version that can be found here.Smith & Co. 1855)
Posted by FAASouza