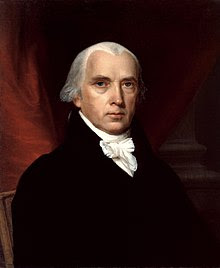 On July 9, 1812, President James Madison, the Father of the American Bill of Rights, issues a Proclamation calling for a national day of  public Humiliation and Prayer.

Whereas the Congress of the United States, by a joint Resolution of the two Houses, have signified a request, that a day may be recommended, to be observed by the People of the United States, with religious solemnity, as a day of public Humiliation and Prayer: and whereas such a recommendation will enable the several religious denominations and societies so disposed, to offer, at one and the same time, their common vows and adorations to Almighty God, on the solemn occasion produced by the war, in which he has been pleased to permit the injustice of a foreign power to involve these United States; I do therefore recommend the third Thursday in August next, as a convenient day, to be so set apart, for the devout purposes of rendering to the Sovereign of the Universe, and the Benefactor of mankind, the public homage due to his holy attributes; of acknowleging the transgressions which might justly provoke the manifestations of His divine displeasure; of seeking His merciful forgiveness, and His assistance in the great duties of repentance & amendment; and, especially, of offering fervent supplications, that in the present season of calamity and war, he would take the American People under His peculiar care and protection; that He would guide their public councils, animate their patriotism, and bestow His blessing on their arms; that He would inspire all nations with a love of justice & of concord, and with a reverence for the unerring precept of our holy religion, to do to others as they would require that others should do to them; and, finally, that turning the hearts of our enemies from the violence and injustice which sway their councils against us, He would hasten a restoration of the blesings of Peace. Given at Washington the ninth day of July, in the year of our Lord one thousand eight hundred and twelve.


James madison.
By the President,