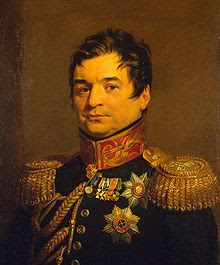 On July 1 1812, Napoleon summons General Alexander Dmitriyevich Balashov to a meeting. Balashov is carrying a letter from Alexander offering to negotiate but not while there remains one French soldier on Russian soil. The meeting takes place in the same room where Alexander had given Balashov the letter six days earlier[1]. Napoleon has taken the Tsar's headquarters as his own. Napoleon now reads the letter and explodes. He is by turns angry, petulant, abusive, and always menacing. Stamping his feet. Pacing the room. Shouting. Ripping a window from its hinges and throwing it [2]:

"Alexander is making fun of me. Does he really think I have come all the way to Vilna to negotiate commercial treaties?"

"They must be thrown back into the the icy wastes, so that they do not meddle in the affairs of civilized Europe for the next twenty-five years at least."

Or perhaps: "I have come to finish off, once and for all, the Colossus of Northern Barbarism. The sword is drawn. They must be thrust back into their snow and ice, so that for quarter a century at least they will not be able to interfere with civilized Europe.

"We must cure the Russians of their curiosity about what goes on in Germany. I consent to admitting the English to Archangel, but the Baltic should be closed to them. Why did not Alexander explain himself to Narbonne or to Lauriston, who was at Petersburg and whom he would not receive at Vilna"

"I am already in Vilna, and I still don't know what we are fighting over"

"Now that the Tsar sees it is a serious matter, and that His army has been cut in two, he is afraid. and wants to come to terms; but I will sign the peace at Moscow."

When Balashov left, Napoleon speaks of Alexander: "He has rushed into this war which will be his undoing, either because he has been badly advised, or because he is driven by his destiny. But I am not angry with him over this war. One more war will be one more triumph for me."